Goals have been a rarity in a Swansea City shirt for Mark Gower - and even more so for his wife Danielle.

The ex-Southend winger has found the net just twice in 114 appearances since joining on a free transfer from the Shrimpers in 2008, the second coming in Saturday's 3-0 win over Norwich City.

That is compared to 41 he scored in 228 games at Roots Hall.

But Gower, who has reverted to a central midfield role, said Danielle and son Jimmy nearly missed his 20-yard drive which kept alive the Swans' push for automatic promotion push to the Premier League.

Swansea remain fourth, level on 69 points with Cardiff City but the two Welsh sides are now just a point off second-place Norwich who saw their nine-match unbeaten run come to an end.

"I couldn't believe it went in," said Gower. "I've hit the bar and the post and had some disallowed before but to finally get one is a nice feeling.

"I sort of lost myself a bit, I didn't really know what to do.

"Thankfully I saw my wife and my little boy up in the crowd, looked at them and gave them a little wave.

"She went shopping for my last goal [in the 2-0 win over Queens Park Rangers in October 2009] and wasn't going to come today but thankfully she did.

"She hasn't seen me score for 114 games, but it was all the more sweeter that it was an important goal.

"My little boy Jimmy is six and he's been giving me a lot of stick about not scoring so it's my turn to have a bit of fun."

Gower admits he has been frustrated by not scoring, but the 32-year-old former Tottenham Hotspur trainee is just glad of the chance to be playing regularly.

He has turned out for the Swans 39 times this season where he has had to battle for a midfield spot against the likes of Darren Pratley, Joe Allen, Leon Britton, Stephen Dobbie and Andrea Orlandi. 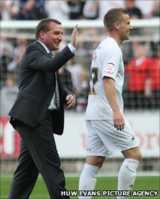 "I've changed position this year but I started my career in central midfield so it wasn't alien to me," he said. "But obviously after playing out wide for so many years it took a while to get used to it.

"I've got good players around me, good communicators at the back and I've slipped in there quite nicely.

"With the midfielders we've got at the club, to be playing 39 games I must be doing something right.

"The manager has shown a lot of faith in me and hopefully I've repaid him.

"The goals side of my game has been frustrating but if I can save them up and get a few more from now until the end of the season, I think we can forget about that."

Just six games stand between Swansea and possible automatic promotion to the Premier League, and while the Swans have been strong at home, it's their away form that could hamper their chances.

At home, the Swans have won 13 of their 20 games losing three times and conceding just nine goals.

But Brendan Rodgers' side have lost 10 games on the road this season including defeats to strugglers Sheffield United, Scunthorpe and Preston North End.

And they face tricky trips to Burnley, Portsmouth and Millwall in the run-in.

"I think our away form has put us under that pressure," said Gower. "We're not getting the results away from home that we need and consequently that's putting pressure on us at home.

"But so far, so good, the boys have responded to that pressure. We've had three big games - Forest Leeds and Norwich at home and we've won all three.

"It's something we need to look at because we haven't found the solution as our away form isn't great, but on the other side we've had a few great results away from home.

"That solidness and togetherness away from home is going to be needed in the last three away games. We want to get second place. We're a formidable side at home but need a few points away from home.

"We seem to rise to the occasion when it's a bigger occasion and that can't be right as we need to battle against the other sides but also it's such an up and down league, anyone can beat anyone."