But Ford admitted Wales' home games with Montenegro on 2 September and Switzerland on 7 October may be played elsewhere depending on crowds.

"I would like to fill the Millennium," Ford told BBC Sport.

Wales have played most of their World Cup and European Championship qualifiers at The Millennium Stadium since 2000, starting with the Nathan Blake scored in a 1-1 draw against Norway. in a World Cup qualifier. 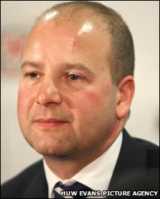 But their 1-0 Euro 2012 defeat by Bulgaria at the Cardiff City Stadium in October 2010 was the first home qualifier played away from the Millennium Stadium since they lost 2-0 to Switzerland at Wrexham in October 1999.

A crowd of 69,000 watched the England game but the FAW accepts that the games against Montenegro and Switzerland may have to be staged elsewhere.

Wales, bottom of Euro 2012 qualifying Group G without a point, could play them at the Cardiff City Stadium or Swansea's Liberty Stadium or Parc y Scarlets in Llanelli.

The venues do not have to be named until 60 days before each qualifier under Uefa rules so the FAW has time before naming which ground will host Montenegro.

"In the long term Gary and I would love to take all of the games back to the Millennium Stadium but we must ensure all of the fans are on our side.

"I'm also not adverse to taking games to the Liberty Stadium, the Cardiff City Stadium or Parc Y Scarlets - so we haven't made that decision yet.

"We want to give the team the backing they need and I am keen to fill which ever stadium we are in.

"I would like that to be the Millennium but if that happens to be the Cardiff City Stadium, Swansea or Llanelli, I'm also happy with that."