The joke among Swansea City's old North Bank brigade is that if you listen to the Camp Nou crowd close enough, Barcelona fans can often be heard singing "it's just like watching Swansea".

Comparisons with the kings of world football would have certainly ensured laughs on Saturday as the promotion-chasing Swans completed their own unwanted treble of defeats by the Championship's bottom three.

Clearly losing at Preston North End rarely offers comparison of the super-slick Champions League quarter-finalists but, defeat or not, the Catalan giants of Barcelona are the model on which Swansea's principles, both on and off the pitch, are built.

Brendan Rodgers is a footballing connoisseur and demands the beautiful game be played the "right way" however ugly the opposition might try to make it.

Yet the Swansea manager is not entirely responsible for his side's distinctive style of football, it was pre-ordained before he won the job when it become vacant in 2010. 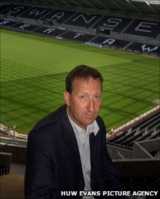 We run a common sense business and when clubs change their playing squads to suit a new manager, it seems completely wrong to us

"Managers have to accept our way of doing things or they don't take the job," Swans chairman Huw Jenkins tells any interested party.

Swansea's pass-and-move penchant for dominating in possession and pressing without the ball - perfected by Pep Guardiola's Barca superstars to universal celebration - has not just earned acclaim but a serious push for Premier League football on a relatively shoestring budget.

Barcelona are the blueprint for footballing wannabes like Swansea, where defenders are urged to play rather than hoof the ball into row z and midfielders are comfortable with the ball at their feet.

"The main priority of British teams is power and pace," said the chairman.

"Whereas we look at players who can actually play football and we develop a system from that.

"Everyone looks at Barcelona and the majority of Spanish teams play a similar system as do a majority of Dutch teams and there was no coincidence that Spain and Holland contested the most recent World Cup final.

"It is a pretty obvious that is a successful way to play but the majority of British managers choose to ignore it."

Regardless of their Deepdale result, Swansea's frugal approach to managing both their team and managing their club is pretty unique in British football.

Rodgers is Swansea's third manager in as many seasons but there was no need for transitions and huge squad upheaval between bosses because of the board's carefully considered managerial selection process.

Swansea have no luxury of a bottomless financial pit, so in an effort to cut down on player acquisitions - plus subsequent transfer, signing-on and agent fees - their squad filled with footballers must be appreciated by any new man in the hotseat.

"We feel that to compete at this level of football, we need to do things a little bit different," said Jenkins.

"There are few professions that allow a manager to come into business and change everything that the business has been doing for the last 10 years.

"When we got to the Championship, to compete with bigger clubs we had to analyse what we feel they do wrong and see how we can improve.

"We run a common sense business and when clubs change their playing squads to suit a new manager, it seems completely wrong to us.

"If a manager is lucky enough to come and work for us then he has to adopt our principles.

"And we have continued to progress despite managerial changes over the last three years so it shows our principles are working."

Roberto Martinez laid the footballing foundations of playing with a joie de vivre before leaving for Premier League Wigan Athletic in 2009 after guiding Swansea to eighth in the Championship in their first season back in English football's second tier.

Paulo Sousa, much maligned by Swans fans for the lack of a cutting-edge, added a steely backbone as he ushered Swansea to seventh before leaving for Leicester in the summer of 2010.

And Rodgers is reaping rewards of Swansea's squad stability as this team have benefited from the experience of Martinez's offensive and Sousa's defensive drills.

The current incumbent has done a little fine-tuning as the Swans seem set to again go one better and finish in the Championship play-offs at the very least.

And despite such a lofty position, Jenkins presides over a club with the rare distinction of being able to post a profit - almost £600,000 at that - in the last financial year.

"We have players that been here for five years or more," said the chairman.

"And most have played and performed well under our last three managers. It is a sound business principle not to have a high turnover of staff."

Out-of-work Rodgers' appointment at the managerless Swans in the summer was not just a marriage of convenience, but a match made in footballing heaven.

"We probably had 20 candidates on our initial list," recalled Jenkins.

"But after stating our criteria of not bringing any backroom staff and using our own coaches, three-quarters of them withdrew their interest.

"After discussing with quite a few potential managers, when I talked football with Brendan it felt right.

"We shared similar football philosophies and he wanted to work at a club where he had time to put his ideas into place - and some of them were already here."

Swansea is a local club at the heart of their community and run by a consortium of local businessmen who saved the club from possible extinction during the dark days of bottom division football in 2002.

"We want continuity that whoever the manager is, or whether we're between managers, that the players come into a familiar environment and work with talented people they know well and love the club," said Jenkins.

"The idea is to coach a clear pattern of play. Players and managers come and go in football but the club try to make sure we're one step ahead."

Swansea's players now must learn how to remain one step ahead against sides, such as Preston, who feel they must get ugly to beat the "most attractive side in the division".