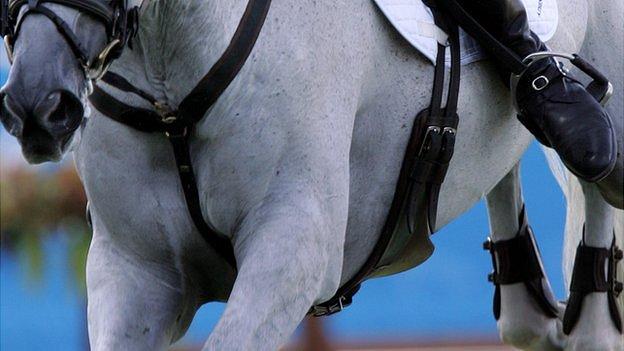 An Irish show jumper under investigation after his horse died at an event in France on Monday has denied "whipping it to death".

Horse Sport Ireland is "extremely concerned" by reports of the "alleged circumstances" of the death of Kevin Thornton's horse, Flogas Sunset Cruise.

"There is no way I would ever whip a horse to death," he told The Irish Field. "That's not what happened."

A post mortem examination is due to be carried out on the horse.

The French equestrian federation is also involved in the investigation, as is the sport's world governing body, the Federation Equestre Internationale (FEI).

The FEI said it had started a full investigation into the incident, which happened on a rest day between two international events in Cagnes-sur-Mer, and revealed the event's organising committee had filed a report to the police.

"The welfare of our equine athletes is our number one priority," added the FEI.

Thornton said allegations of whipping were being made by people "confused" because he was riding several different grey horses during the session.

In a statement issued on Tuesday, the Swiss-based Irishman said the 10-year-old horse had "felt very weird" and "suddenly collapsed" as he finished his 20-minute ride and dismounted.

He said he had whipped the horse "once or twice" to encourage it to move forward, but said reactions on social media had "escalated into a witch-hunt endangering my safety and reputation which is totally unacceptable."

"I am very sad and devastated about this tragic accident," added Thornton. "It is heart-breaking to see a horse die".

Vinnie Duffy, the horse's owner, said he was "devastated", both at the loss of the horse and for Thornton's "vilification".

"I feel so bad for him, it's awful what is being said," he told The Irish Field, a bloodstock, racing and sport horse publication. "The last thing in the world I would condone is any abuse of horses. Horses are our lives and our business."