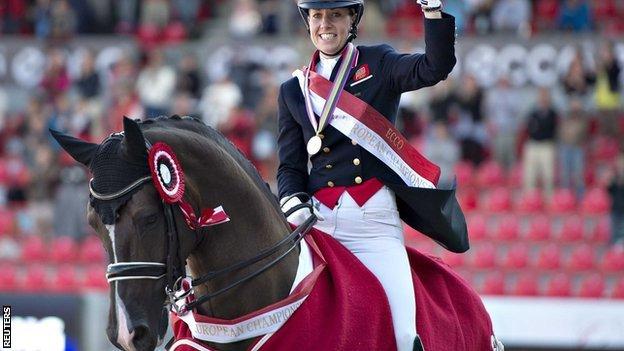 The 28-year-old and her horse Valegro will also be going for a world record in Tuesday's World Cup dressage freestyle competition.

"I would love to do it at Olympia. Who knows?" said the world number one.

"The horses feel the atmosphere a lot more, but I am going there to try to break that world record."

Dujardin and Valegro are unbeaten for almost two years and the combination won two individual golds and team bronze at the European Championships in Denmark earlier this year.

The Gloucestershire-based rider is planning a new routine for next summer's World Equestrian Games in France.

The five-day competition at Olympia will see showjumping take centre stage from Wednesday, with British riders Scott Brash and Ben Maher - currently ranked one and two in the world - in action.

LIVE COVERAGE ON THE BBC