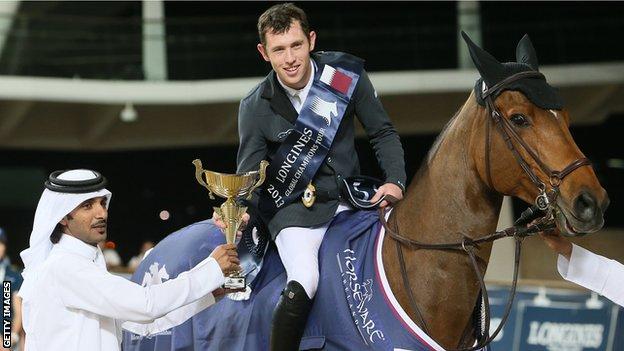 Victory in the series-ending grand prix at Al Shaqab Arena in Doha elevated the Scot from eighth to first overall.

"It couldn't have been a better day for me," said Brash, who also turned 28 over the weekend.

"He [Sanctos] is a horse for a lifetime and has given me so much success. There are so many people to thank who made it possible for me and the horse to come to Doha, compete and emerge as the winner.

"You don't get too many horses like him. He is very clever, very sharp."

Brash and Sanctos were also successful at London 2012 and Great Britain team boss Rob Hoekstra said of Brash's latest win: "I am absolutely over the moon with the win.

"We made a specific plan to go for the grand prix with Sanctos, and it couldn't have gone better. Scott rode him beautifully and it all just went right.

"He rides beautifully, he thrives under pressure and the way he pulled off the short turn to the double in the jump-off was nothing short of great."