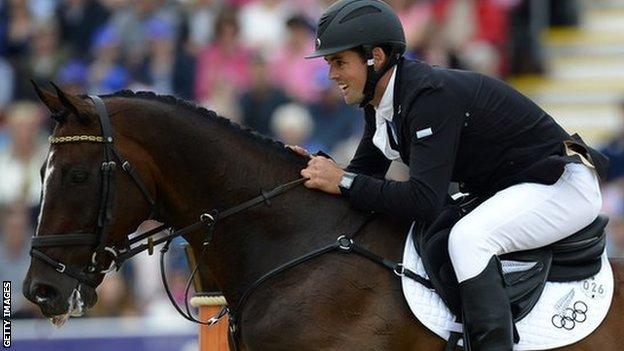 Clifton Promise tested positive for the tranquiliser Reserpine and has been provisionally suspended for two months.

As the "person responsible" for the horse, Paget, 29, has been banned pending the outcome of a B sample.

New Zealander Paget, who was aiming to complete the Grand Slam of Eventing in Kentucky in April, is "shocked".

A statement from Equestrian Sports New Zealand said: "Paget and all relevant parties state categorically that none of them have taken any actions with the intent of administering any prohibited substance.

"ESNZ and Paget are establishing a likely cause of the positive test and will provide submissions to the International Equestrian Federation Tribunal (FEI) as required."

Clifton Promise was tested following his victory at the Burghley International Horse Trials on 8 September.

In September, he became the first rider in 24 years to win Burghley and Badminton on the same horse in the same season.

A prize of £225,000 is available to a rider that wins consecutive Badminton, Burghley and Kentucky competitions. It has only been achieved once before, by Britain's Pippa Funnell in 2003.