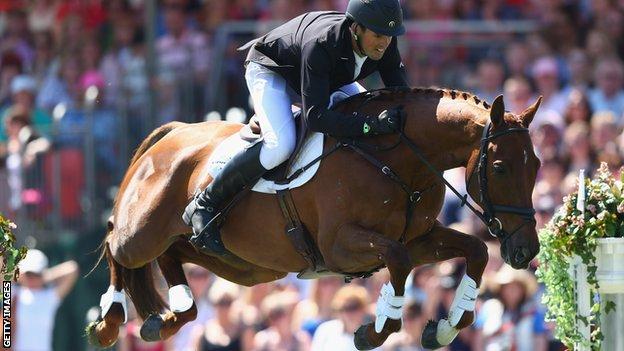 Paget leads aboard Clifton Promise but his hopes of finishing first and second are over after withdrawing Clifton Lush before Sunday's final horse inspection.

He had been second with Clifton Lush heading into the show jumping finale.

Paget hopes to become the first rider in 24 years to win both premier events on the same horse in the same season.

The six-time Burghley champion said about his ride: "He gave me a fabulous round but it was very annoying to pick up those two time penalties.

"I didn't think I would get any as I thought it was going so well."

The world number two had less than ideal preparation, after being held up by a security strike at Copenhagen Airport when returning from winning an individual bronze medal at the European Championships last weekend.

The last rider to win both Burghley and Badminton titles in the same season on the same horse was Britain's Ginny Leng on Master Craftsman in 1989. The last rider to do the double - but on different horses - was Briton Oliver Townend in 2009.

Paget - a former bricklayer who was a member of New Zealand's bronze medal-winning team at London 2012 - has ridden Clifton Promise for the past six years.

"He's now 15-years-old and I don't know how many more runs he will have after this event. He's an amazing horse," he said.

Triumph at Burghley would leave Paget needing victory at Kentucky next spring to complete eventing's £225,000 Rolex Grand Slam, awarded to a rider that wins consecutive Badminton, Burghley and Kentucky competitions. It has only been achieved once before, by Britain's Pippa Funnell in 2003.

New Zealand currently fill seven of the top 10 places at Burghley, with world number one, Andrew Nicholson, 52, holding three of those positions.

He rode all three of his horses clear around the cross country, with last year's winner Avebury his best-placed behind Paget in third.

With a string of recent accidents in the sport, course designer, Captain Mark Phillips, believes the day was a success.

He said: "No horses or riders were hurt and 40 of the 63 horses who started jumped around clear. It was a good day for the sport."