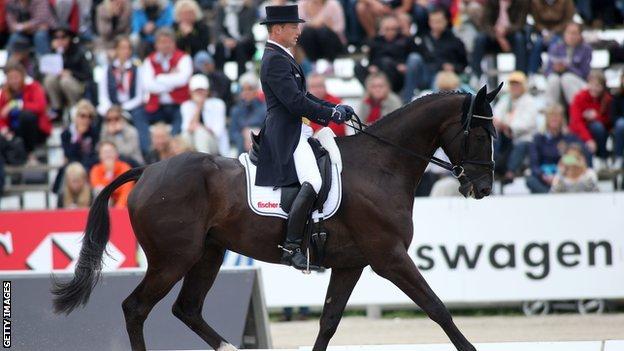 Great Britain's eventers are in third place in the European team event as holders Germany set the pace on day two of the four-day competition.

Germany hold an eight-point lead over second-placed Sweden after the dressage, with Britain 13 points behind in Malmo, Sweden.

"We've got a bit of catching up to do, but it is not over yet," said Fox-Pitt.

Jung's impressive lead has been achieved on his back-up horse Halunke, after his first-choice Sam was injured.

London 2012 silver medallists Britain go into Saturday's cross-country having only a slim chance of reclaiming the team title they won eight times in succession between 1995 and 2009.

Fox-Pitt apart, though, Britain's star of the show on day two was championship newcomer Izzy Taylor.

Assessing the 31-obstacle cross-country challenge, Fox-Pitt added: "It's not going to be dull. Some of the turns are very tight, and I hope Chilli will be listening.

"It is far removed from what we are used to, but that is the excitement of the sport. Part of the challenge is riding your horse to the course. It will be an interesting day."

Ireland lie in sixth place, with Joseph Murphy and Electric Cruise their leading individual in 14th.