With all professional sport in England suspended because of the coronavirus pandemic, players and clubs have been doing their bit to help those most in need.

From clubs offering stadiums and facilities to the NHS, to a couple of England cricketers turning their pub into a village shop, sport has stepped up during the crisis.

Here's a closer look at what is being done across the nation.

Stuart Broad should have been racing in for England on their tour of Sri Lanka, while Nottinghamshire team-mate Harry Gurney was preparing for a stint in the Indian Premier League. Coronavirus, of course, scuppered those plans.

Instead the pair are re-opening one of the pubs they co-own near Melton Mowbray as a takeaway and village shop. Not only are they helping to feed the local community, but also making sure their staff get paid.

A free delivery service is also available for over-70s and NHS workers in the local area.

"We hope we will allow people to pick up essential goods without having to go to a supermarket. Here we've got the essentials and almost enough for people to do their weekly shop," former England limited overs seamer Gurney said.

"Hopefully it will be easier and safer for people to pick up a few essential items.

"It's been quite full on, we're essentially trying to launch a whole new business in a couple of days. People have been great, donating baskets for us to put fruit in and donating furniture for us to stack tins on."

Broad, who has owned the pub in Upper Broughton since 2016, said his focus was not on cricket.

"It's a very difficult time at the moment and we saw it as an opportunity to help the community," Broad said.

"We're being very careful, only letting two people in at a time to the shop and hand sanitiser on arrival but the news is changing daily."

As cases of coronavirus pass 8,000 in the United Kingdom the National Health Service is coming under increasing pressure to cope.

With hospitals getting closer to bursting point, some clubs are offering the NHS use of their stadiums to free up some room.

Watford became the first Premier League side to do so on Wednesday. Vicarage Road is located next to Watford General Hospital and the club says it will do "whatever it takes" to support the health service.

While the ground is unlikely to be used to treat patients, it can host NHS staff courses, provide urgent meeting spaces, cater for warehousing needs and offer childcare facilities.

League One side Ipswich have said Portman Road is available for emergency use, while Premiership rugby union club Leicester Tigers are allowing staff at Leicester Royal Infirmary to use one of its car parks.

With the start of the county cricket season delayed until at least 28 May, Durham and Kent say the NHS can use their Riverside and Canterbury grounds if needed. 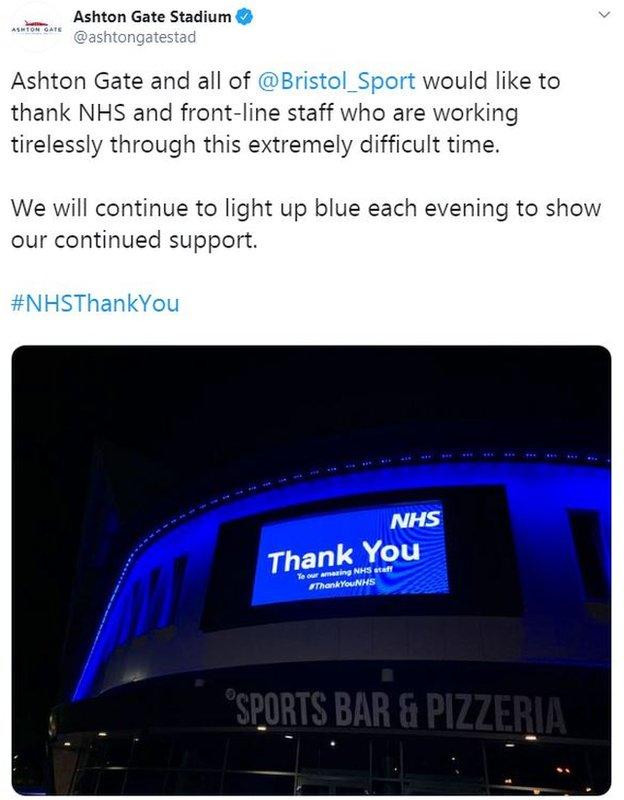 There is no indication of when matches might resume, but Premier League sides Brighton and Bournemouth have promised to donate 1,000 tickets to NHS workers for future games.

Letters are being sent out this week telling 1.5 million people in England most at risk of coronavirus to stay at home.

The government is advising them not to go out for at least 12 weeks to protect themselves.

But a scheme, launched by Premiership rugby union side Wasps, is "helping to ease the pain" of those feeling isolated.

The #makethatcall movement sees players and managers ring their most vulnerable supporters simply to have a chat or offer help.

England and Wasps flanker Brad Shields is one of those taking part.

"It's to check in on people who might be isolated or might be alone, potentially missing out on something they're used to doing," the 28-year-old told 5 Live Breakfast.

"That causes a bit of a mental strain on people and we wanted to try and ease that pain a little bit."

The idea is now gathering momentum and moving into other sports. Karl Robinson, manager of League One side Oxford United, made a phonecall to elderly supporter Ron Slater.

"It was great to hear him. He was cutting the grass, he was well, he was fit and looking forward to seeing us back playing again," Robinson told the club's Twitter account.

The Wolves at Home campaign sees former fan favourites including Matt Murray, Steve Bull and John Richards using video and telephone calls to get in touch with fans.

"We all need to stick together during this difficult time," Wolves record goalscorer Bull said. "Checking in on our oldest fans is really important. I'd love to pop round in person for a cuppa, but this is the next best option."

With most children now at home, one county cricketer has come up with a way of keeping them entertained. And active.

Durham veteran Chris Rushworth has set up his own Youtube channel where he offers cricket coaching from his back garden.

"With things the way they are at the moment, everyone seems to be locked inside," he said.

"Schools are very limited, there are no leisure centres, no cricket clubs, they're all shut down. I want to try and help them improve their game and keep as busy and active as possible."

Rushworth's son Henry is helping with some of the drills for the youngsters while Rushworth, whose county career spans 16 years, will also be offering tips for "more advanced players".

"Henry is just about to start his first season of cricket this year at under-nines, so he will be showing some tips and helping me along the way for beginners," he added.