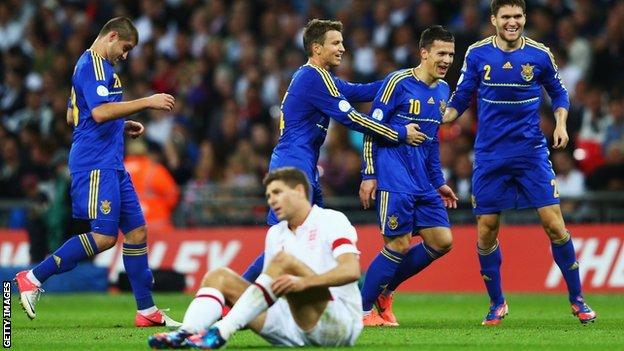 England last walked off the pitch at Kiev's Olympic Stadium as the clock approached 1am on 24 June 2012 after death by a thousand passes and an inevitable defeat on penalties by Italy.

It was the end of England's Euro 2012 campaign, tired legs and technical flaws finally exposed by Andrea Pirlo before the trademark exit via spot-kicks.

Roy Hodgson was new to the England manager's job back then. Indeed so late was his appointment that many - though not Hodgson himself it should be stressed - almost regarded the tournament as his equivalent of a free hit.

No such leniency will apply should England leave Ukraine in the small hours of Wednesday morning without at least the point they probably require to keep them on course for automatic qualification for next summer's World Cup in Brazil.

Hodgson had every right to bemoan his and England's luck after the comfortable 4-0 win against Moldova at Wembley on Friday. Having already lost Wayne Rooney to an accidental kick in the head in training and Daniel Sturridge, displaying the form of his life at Liverpool, to a thigh injury, Hodgson lost Danny Welbeck to suspension after a yellow card for kicking the ball away that was at best borderline and at worst desperately harsh.

It shone an unforgiving light on England's reduced circumstances in terms of strikers, but Kiev was an unforgiving environment on that balmy June night last year and will be again as Hodgson reaches a defining point in Group H.

Ukraine warmed up with a few free hits of their own on that perennial punchbag of international football San Marino. Their 9-0 win in Lviv was as much an exercise in confidence building as was England's dispatch of the slightly less hapless Moldovans.

Eight Ukrainians put their names on the scoresheet and they are unbeaten under coach Mikhail Fomenko. They will present the sternest test Hodgson's England will face in this group - and more than likely the decisive one.

Hodgson will need no warning of what awaits in the vast bowl of the Olympic Stadium as it took a late Frank Lampard penalty to rescue a point in a 1-1 draw with Ukraine in the qualifier at Wembley in September 2012.

And England may still find their opposition, and fervent support, harbouring a sense of injustice from the last time the teams met in Ukraine. Wayne Rooney gave England a 1-0 win in Donetsk during the Euros but the hosts complained long and loud that Marko Devic's goal should have stood after John Terry cleared his effort from behind the line.

Another England victory will be a cause for elation, with Hodgson's men currently a point ahead of Ukraine at the top of the group after seven games, a draw a cause for guarded optimism after Montenegro's draw in Poland, and defeat cause to start planning for the play-offs.

Hodgson's options may be reduced by injury and suspension - the decision to replace Rickie Lambert to protect him for Ukraine and also the removal of Ashley Cole at half-time to reduce his prospects of a ban only underlined this game's importance - so it is likely he will opt for experience.

Goalkeeper Joe Hart's recent dip in form may face a searching examination after his night off at Wembley on Friday while Gary Cahill and Phil Jagielka are now regular central defensive partners.

Steven Gerrard and Frank Lampard, who will win his 100th cap should he play in Kiev, will join Jack Wilshere in being entrusted to control midfield.

The major question facing Hodgson is whether to start with Manchester City's James Milner or opt for a less conservative option on the left-flank.

Hodgson's reputation is indeed one of conservatism and he spoke eloquently about what Milner gives his teams after his brief appearance as a substitute on Friday. This applies even more away from home.

Milner may not be the most flamboyant of players but Hodgson knows he will not only offer England service going forward but is also tireless in his defensive duties. He can be trusted.

After the Moldova victory, the England boss said: "We know what James will do. James doesn't pretend to be as exciting as some of the wingers we sometimes see these days.

"After a long period of time when I haven't seen many wingers in this country I'm seeing a lot of good young ones now but the game in Kiev is one where we are going to need the experience, strength and quality.

"James is not a winger but he has got lots of quality. He has hardly had any games with Manchester City so I wanted him to get some minutes against Moldova."

The new Football Association chairman Greg Dyke raised some eyebrows when he admitted England were not realistic contenders to win next summer's World Cup in Brazil. And, in his defence, he would have raised a lot more had he suggested they would.

But the first task, before that debate can even become an issue, is to reach Brazil - and events in Kiev on Tuesday will have great influence on shaping England's hopes.

It will be a high point of Hodgson's reign if he can leave with a win - but defeat will mean anxious times before the remaining two Wembley qualifiers against Montenegro and Poland in October.