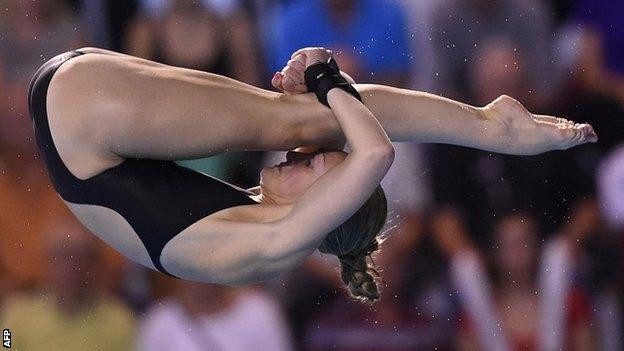 The Devonshire diver sealed the title with five well-executed routines to give her a personal best 363.7 total.

"It's really good. I came here for a medal and I wanted a gold but I didn't expect it," Barrow, 25, told BBC Sport.

"Tonia Couch and I made history two years ago winning the 10m synchro gold and now I've got an extra one."

The last individual European medal won by a British woman was in 1958, when Charmain Walsh won silver in the 3m synchro.

Fellow Britons Chris Mears and Jack Laugher finished in fifth place in the 3m synchro with 391.98 points, compared to their Commonwealth Games gold-winning score of 431.91.

"It such a bad way to end the season," said Laugher. "We both had a really good world championships and an amazing Commonwealth Games - we should have finished there.

"To come here and finish on that kind of low, it sucks, and it really hurts our pride.

"What we've done throughout the year feels worthless now having finished on such a bad performance."

Mears said: "It's been a ridiculously long season for us. There was something telling me I was very tired because I lost one of our main dives before we came here, due to stress and tiredness I would diagnose it with."

Barrow, who won silver in the 10m synchro with Tonia Couch at the Commonwealth Games, went into her fifth and final dive with her lead cut to just 2.1 points over Italy's Noemi Batki.

"None of my dives dropped below seven marks and I actually increased to eight-and-a-half, so that is a really good individual competition for me.

"It was my last competition - I've had a big year and a lot of injuries, so it's good to finish the season on a high."