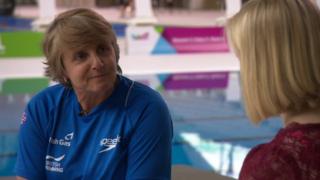 Tom Daley's new diving coach, Jane Figueiredo, tells BBC London she has "left everything she loved" in America to come and coach Daley to a gold medal at the Rio de Janeiro Olympics in 2016.

Zimbabwe-born Figueiredo was previously the head coach of the diving programme at the University of Houston and officially started her new role in mid-January.

Plymouth-born Daley, who won bronze in the men's 10m platform at London 2012, is now training at the Aquatics Centre in London's Queen Elizabeth Olympic Park.

Figueiredo describes the 19-year-old's work ethic as "amazing" and says Daley is "the real deal".

England 'strong and ready to compete'