The Tokyo Paralympics have come to an end - a year later than planned.

Despite the lack of spectators, there have been the usual moments of joy, pain, agony and ecstasy.

We have seen the standard of Paralympic sport rise once again, new stars come to the fore, established athletes impress on the big stage and some Games veterans passing on the torch to the next generation.

BBC Sport looks at some of the memorable moments... 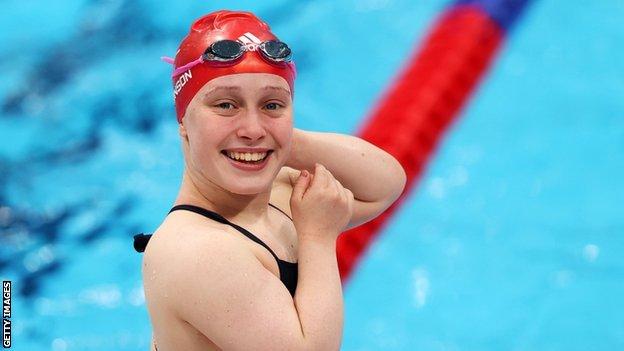 Having come into the Games as a defending champion, British swimmer Ellie Robinson seemingly had a certain amount of pressure on her shoulders.

But behind the scenes, the 20-year-old was dealing with her body failing - the Perthes Disease she was diagnosed with in 2012 was causing her constant pain in her right hip and she needed a huge amount of grit and determination to even make the start line.

After she failed to finish on the podium in her favoured 50m butterfly, she gave an emotional post-race interview in which she said her Games had been a "story of triumph, not defeat".

"Even though I didn't win a medal, I went out on my terms," she said. "I'm just so proud of myself for getting so far."

The GB wheelchair rugby team came to Tokyo as European champions but having failed to win a Paralympic medal with two fourth places, two fifths and a sixth since the sport made its debut in Sydney.

GB's road to Tokyo was definitely not a smooth one. The sport had its UK Sport funding cut post-Rio before it was partly restored, while the pandemic also had a massive impact on training.

But the team rose brilliantly to the occasion. A pool defeat by the USA was the only blip and when the sides met again in the final, GB emerged victorious 54-49 to spark scenes of joy. 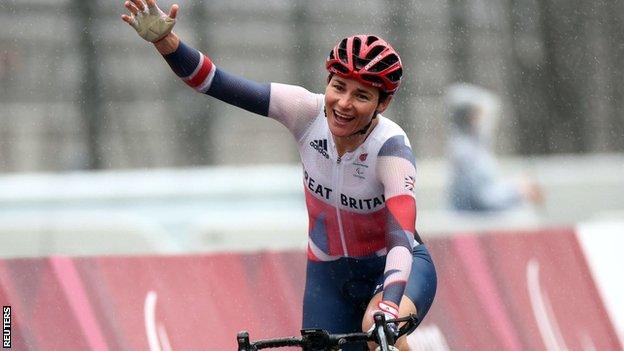 When she switched from the swimming pool to the bike in 2005, nobody could have expected Sarah Storey to achieve the success she has - apart from the woman herself.

She came to Tokyo knowing that three wins from her three races would see her beat Mike Kenny's British record of 16 Paralympic golds.

First she set a new world record on her way to gold in the pursuit in the velodrome, then on the road was a comfortable winner of the time trial before the road race at a soggy Fuji Speedway to cement her place in history.

After breaking the record, one of her main priorities was to get home to Cheshire and sew labels into the school uniforms of daughter Louisa and son Charlie for their return to school.

This won't be the last we see of Storey - her children want to see her competing again in person so Paris beckons.

The odds were not on the side of the British Para-equestrian team as they headed out to Tokyo.

First, eight-time champion Sophie Christiansen was ruled out after her horse picked up an injury and then Sophie Wells' first-choice horse had to be replaced because of injury.

It put the pressure on Wells, Natasha Baker, Lee Pearson and Christiansen's replacement Georgia Wilson, but the quartet delivered brilliant performances on some inexperienced horses who had never competed abroad before.

They retained their Paralympic team title, which GB has held since the sport made its Paralympic debut in 1996, beating the Netherlands by the narrowest of margins.

It was one of eight medals in total with Pearson and his horse Breezer, who he raised at home from birth, also taking two individual titles. The 47-year-old now has 14 golds overall.

Afghanistan's athletes make it against the odds 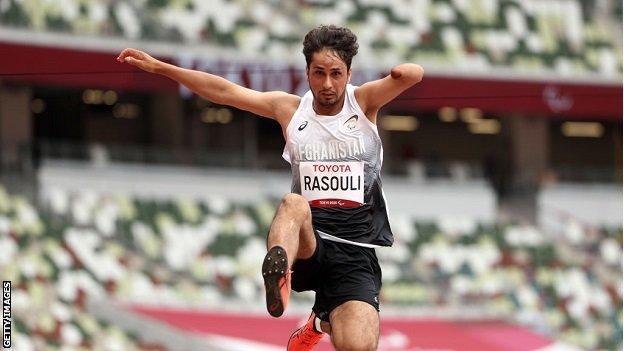 The Paralympic dreams of Afghanistan's Houssain Rasouli and Zakia Khudadadi looked to be over when the Taliban seized power.

But amazingly, the pair were evacuated from Kabul in a "major global operation", travelling to France and then on to Japan. Their arrival was celebrated worldwide.

Rasouli arrived too late for his favourite 100m event and instead competed in the long jump while Khudadadi took part in the taekwondo event on Thursday.

Results didn't matter - this was so much more than that. 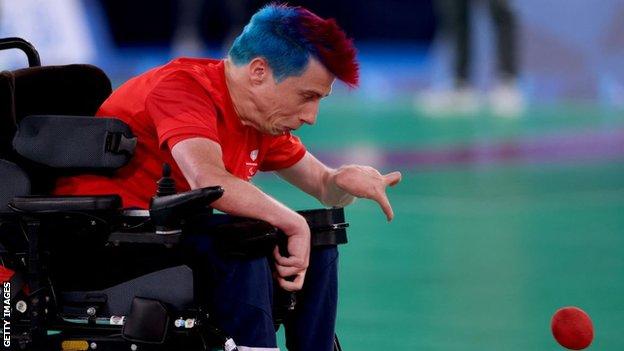 When it comes to boccia, there aren't many better than Britain's David Smith and he had viewers gripped as he went up against Malaysia's Chew Wei Lun in the BC1 final.

While cycling and athletics show speed and power, and wheelchair rugby and wheelchair basketball are all crash, bang, wallop, boccia, which is similar to boules, has a special blend of skill, tactics and precision.

It also occupies a key place in the Paralympic movement, catering for some of the most impaired athletes at the Games, and it is one of two sports which has no Olympic equivalent.

In Tokyo, in his fourth Games, Smith needed all of his nous to come from 2-0 down after the opening end of his match to win 4-2 and retain his title.

"I wouldn't be a Paralympian without boccia," said Smith, who carried the GB flag at the closing ceremony. "I swim like a brick, I can't run, I couldn't throw a club in athletics. What else could I do?"

Double delight for the Fachies 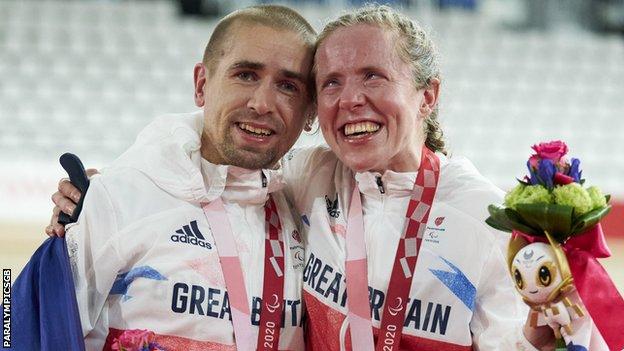 Husband and wife Neil and Lora Fachie had a day to remember at the Izu Velodrome on 28 August.

The couple, who are both visually impaired, are key members of the GB Para-cycling team along with their pilots Matt Rotherham and Corrine Hall.

And scheduling meant both of their main events, Neil's B 1000m time trial and Lora's B 3,000m pursuit final, were held on the same day, minutes apart.

In London, Neil got gold while Lora missed out and four years later in Rio, the roles were reversed with Lora victorious and Neil missing out.

But this time around, they both won gold in the space of 16 minutes and could share that special moment together, showing Jason and Laura Kenny that there is more than one power couple in British cycling.

More valuable than a medal 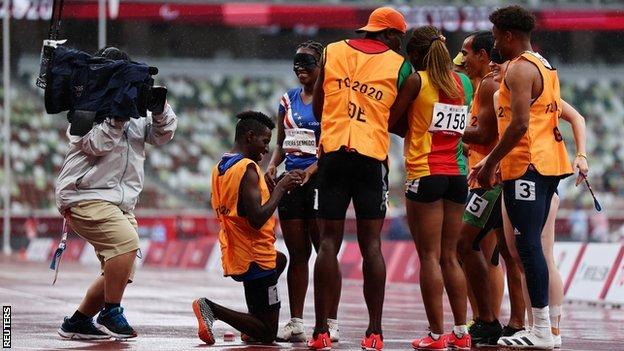 Cape Verde sprinter Keula Nidreia Pereira Semedo might have failed to win a medal in her women's T11 200m race, but she is coming home with something shiny - an engagement ring.

After finishing last in her heat, Semedo's guide runner Manuel Antonio Vaz da Veiga assembled the rest of the field and got down on one knee on track to propose to her.

Luckily for him, she said yes.

Vas da Veiga said he had been planning the magic moment since Semedo was selected for the Cape Verde squad in July.

"I thought this was the best occasion and the best place to do it," he said.

Jonnie Peacock came to Tokyo chasing a third consecutive 100m crown and although he failed to win gold, he was involved in one of the closest and most exciting races in the T64 final - one of the events which shows the rising standard of Para-sport.

The first four athletes crossed the finish line within 0.04 of a second with gold going to Germany's Felix Streng in a time of 10.76 seconds and silver to Costa Rican Sherman Isidro Guity Guity.

Peacock and German Johannes Floors endured an agonising wait of more than three minutes before being confirmed as joint bronze medallists with each clocked at 10.786.

"If that's not an advert for Paralympic sport in 11 seconds, I don't know what is," said Peacock.

Despite the uncertainty surrounding the Paralympics, and the Covid-19 protocols in place amid rising case numbers in the country, Japan took the Games to its heart.

The hosts' athletes also rose to the occasion with 51 medals including 13 golds - with eight of those coming in the final three days of competition, including one for wheelchair tennis player Shingo Kunieda.

The men's wheelchair basketball team, ranked ninth in the world pre-Games, almost made it a fairytale finish but lost to defending champions USA in a thrilling final.

This wasn't the Games that the Japanese public expected - or deserved - but the volunteers and staff deserve huge credit for ensuring that they passed off smoothly.