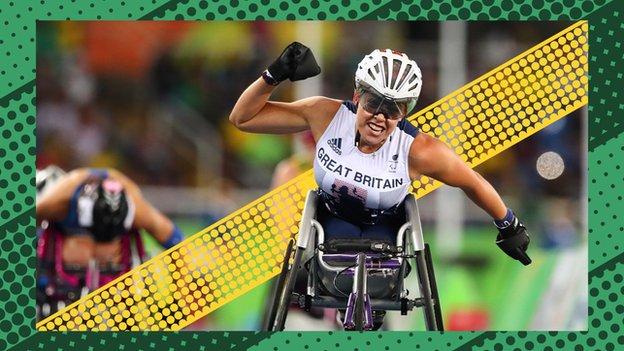 Hannah Cockroft may be one of Britain's most recognisable Paralympians but she often has to correct people when they presume her bank balance "has a lot of zeros" on the end of it.

"It always shocks them when I say I actually pay more to enter the race than I win at the end of it," she says.

"People expect that as a Paralympic gold medallist I'm going to be in the same boat as Jess Ennis-Hill and Mo Farah, but I'm not. If you ever expect to come into this and be a millionaire, you're in the wrong job."

Para-sport is not cheap when the cost of wheelchairs and other specialist equipment is added on top of the usual list of expenses.

It doesn't help then, that prize money in para-sport is almost "non-existent".

As organiser of the Paralympic Games, the International Paralympic Committee (IPC) does not offer prize money at either its flagship event, or in any competitions for the 10 sports for which it acts as international federation, including athletics and swimming.

These are wheelchair tennis, marathon racing, and para-equestrian.

"I think to be honest, I'm used to it," Cockroft - a five-time Paralympic and 12-time world champion - tells BBC Sport.

Where is prize money on offer?

Winners in the wheelchair doubles earned £18,000 per pair, while the quads singles champion won £34,000, and similar figures are up for grabs at the other three Grand Slams, though still considerably lower than the takings won in the non-disabled tournaments.

At the World Equestrian Games in 2018, Para-dressage champions won $4,000 (£2,890), while the winners of this year's wheelchair tournament at the Rugby League World Cup will receive prize money for the first time.

Compare that with visually-impaired Alpine skier Kelly Gallagher. The most she has ever won was a leg of ham.

"Someone said it was worth a lot of euros but we couldn't take it out of the country so gave it away," the Winter Paralympic gold medallist said in 2020.

British wheelchair tennis player Lucy Shuker said: "Tennis does compare favourably to other wheelchair sports, and I know that the Grand Slams offer a lot more, and the top four players could probably make a living from it.

"The rest of the tour, invariably you won't win enough to pay to compete and with Covid impacting the world, there'll be even less money."

Does more need to be done in other areas first?

But before prize money has any chance of becoming the norm in para-sport, there are other things that "have to be put into place" according to Sarah Storey.

"None of us compete for the possibility of prize money, that's kind of a given," says Storey, winner of 14 Paralympic titles in swimming and cycling.

"Prize money is almost kicked down the road a long way."

She says the IPC, UCI and other international federations have to "almost twist people's arms" to host competitions, and other aspects, such as sponsorship and TV rights, need to become more commonplace before any "nice-to-haves" like prize money.

"What is it about the brand of this side of the sport that isn't as appealing?" she tells BBC Sport. "How can they develop that brand to be something lucrative? To be something that's wanted and sought after?"

Cockroft agrees. She organised a meet in 2019 which offered prize money courtesy of her own sponsor, and consequently saw lots of entries because "that's what draws people in".

Two years on, and largely due to the coronavirus pandemic, she has no races in the diary and does not know how she will qualify for the Tokyo Paralympics.

"But then no-one sponsors it because no-one comes to watch it. We need everything to happen at once for this to go well."

Both say it should have happened after the London 2012 Paralympics.

"What we need is exposure and profile," Storey says. "We need to build the stories of athletes, we need visibility if we want the outcome of prize money for everybody.

"I'm really disappointed that there's been no progress between the Games in London and now. We've spent nine years waiting for that next step.

"We're almost at the point of saying we have lost the momentum of the [London] Paralympic Games in terms of the impact it could have had on para-sport."

The IPC, which is based in Bonn, Germany, said it cannot pay prize money because of its "stated purpose as a non-profit organisation under German law".

The UCI, which governs Para-cycling, said: "Given the large number of sport classes in para-cycling, the UCI believes that awarding cash prizes at UCI Para-cycling events would unfortunately represent a disproportionate burden on the event's budget.

"The amounts devoted to prizes would even endanger the existence of these leading events on the UCI Para-cycling international calendar.

"As have the majority of Paralympic sports, the UCI decided to support the organisation of major international events rather than spend very large amounts for a minority of the peloton who would only benefit very little due to the large number of winners. Moreover, given the organisers' limited budgets, any surplus money is reinvested in the development of Para-cycling."