Neil Fachie said he was "really confused" after clinching gold at the Para-cycling Track World Championships with Matt Rotherham - despite not finishing the race.

The pair crashed "at about 75kmh" in the men's B tandem sprint final bend.

Organisers awarded gold to a bruised Fachie and Rotherham as they had been set to win and no rider was at fault.

"Are we the first people to win a world championship without finishing a race?" he tweeted.

British compatriots James Ball and pilot Pete Mitchell, who technically won the second round to take it to a third and final race, picked up silver.

"Things were going incredibly well until the final ride when we were well ahead and just about to win the Championship when we had an unexpected crash at about 75kmh, which was a little painful to say the least," Fachie, of Aberdeen, told BBC Scotland.

"The moment we crashed I heard the announcer loud and clear saying 'and the new World Champions are…' and then we're sliding along the track, and I was really confused.

"I wasn't aware there was a rule in track cycling where the race officials can declare if you were well ahead and winning - and fell in a crash for no real reason, if it wasn't anyone's fault - then they can still declare you the winner."

Such was the adrenaline at the event that Fachie said he immediately got back up and felt like he was "ready to race again" after the crash - something he thought he would have to do before the declaration.

Although crashing at 75km/h, the pair escaped with minor injuries as Fachie claimed his 13th World Championship gold medal.

"It probably wasn't the most enjoyable podium ceremony I've ever done." 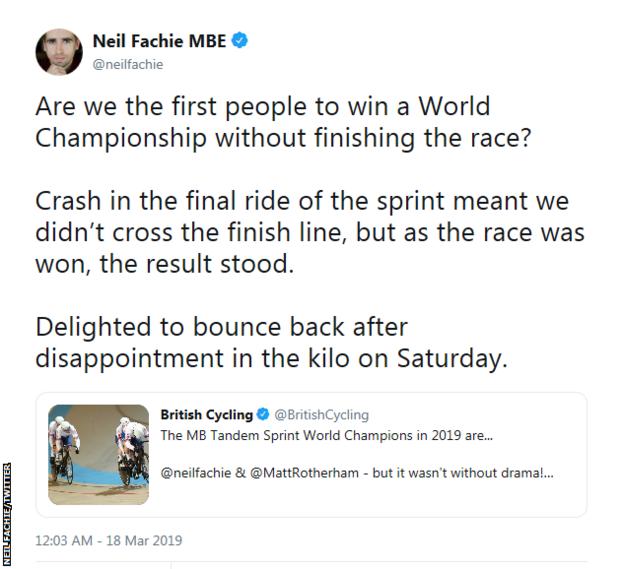