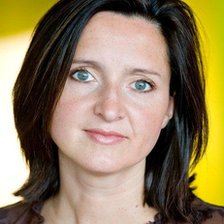 "I thought it would be a good idea to jump onto part of the forklift and just try to show off..."

Sammi Kinghorn, 14 at the time and playing at the family farm in the Borders, suffered a life-changing accident seven years ago.

"My Dad didn't realise that I had jumped on [the forklift] and he just carried on with his job; he started to lower the beam down on top of me," the 21-year-old record-breaking T53 Para-athlete tells BBC Scotland.

"I remember watching as the bucket started to lower and screaming: 'Dad, please don't!' I remember watching the beam come down and thinking in that moment: 'I'm going to die - my Dad's going to think he's killed me. He's not going to be able to live with that.'"

Kinghorn's life has changed a great deal since the accident at her Berwickshire farm, and the Scottish Paralympian wheelchair racer has taken the sport by storm.

Preparing for next month's World Para-Athletics Championships in London, Kinghorn reels off her records with aplomb.

"It gives me great confidence knowing that the competition was so high. It was fantastic to see where I was in the world and to be able to keep the performances going and to break even more records was really cool."

Reflecting on her accident on that snowy day in December seven years ago, Kinghorn recalls: "The first feeling I felt was guilt, and then an enormous amount of pain as I felt my back go - I heard it and I knew that it wasn't good. As I lay there, I remember feeling all the muscles in my legs tightening up and then squeezing, and then just release.

"All my toes felt like they were moving individually and then they just stopped. I knew in that moment that I wasn't going to be able to feel my legs again. I was carried into my house and we waited for the ambulance to come. I then spent about six months in the Southern General Hospital in Glasgow."

Kinghorn's dad Neill admits it is a bitter-sweet experience weighing up his daughter's success.

"To hear that your daughter has just broken a world record - it's very emotional with everything we've been through," he says.

"But, on the other hand, what would she have been doing with her life if the accident hadn't happened? But, as Samantha says, 'I'm happy, I'm doing things I would never have thought of doing'. She's seen more of the world than she ever thought she would see.

"It's very bitter-sweet some days, there are good days and bad days."

Kinghorn herself is resolutely upbeat, refusing to dwell on the misfortune which has shaped her life.

"I can't stand up and put one leg in front of another but I can push pretty fast. I can travel the world and meet so many incredible people. I love my life."

'Sammi is going to be a contender'

Kinghorn's coach Ian Mirfin believes the tenacious Scot will be a medal contender at London's Olympic Stadium, where the World Championships will be held from 14-23 July.

"It really is a tough sport," he says. "Wheelchair racing, in my opinion, is the toughest of the Para sports. There were nearly 400 athletes at the competition we were at in Switzerland.

"The days of Para sport being something where you can show up and medals are easy to come by are long since gone.

"I think with the World Championships, Sammi is going to be a contender. Everybody's looking at her; you could see that when we were in Switzerland and the girls are very wary of her.

"She's certainly moved up a notch and it's hard to predict what will happen, other than she's going to go in in great shape. She'll be a contender."

What are Kinghorn's own targets for the event?

"The first expectation is to make the finals and then, on the day of my final, if everything goes right, you just have to wait and see," she adds.

"I watched London 2012 and I can't wait to be in that stadium. It's a dream come true really. And, to be in such great form going into London, I can't wait."