There has been a wealth of memorable and moving moments from the Rio Paralympics and BBC reporters Elizabeth Hudson and Nick Hope have witnessed many of them first hand.

We asked them to share their favourite experiences of covering the Games in Rio.

When Kadeena Cox declared her intention to compete in both cycling and athletics at the Rio Paralympics, many had their doubts.

How could the 25-year-old, a talented sprinter before a stroke in May 2014 led to multiple sclerosis, manage the demands of two elite sports, plus her condition?

Her mum thought she was crazy but Cox, who admits to being stubborn, would not be deterred, starting her quest with 100m bronze, switching to the velodrome where she set a new world record to win her 500m time trial and then moving back to the track for 400m gold and a relay silver.

She had the broadest smile imaginable on the medal podium, knowing her stubbornness had earned her a place in the Paralympic history books.

Every Games - Paralympic or Olympic - needs home-grown heroes to excite and engage the host nation and no-one achieved that in Rio more than swimmer Daniel Dias, who was born with no feet or hands.

He was already a superstar of Paralympic swimming, with 10 gold medals, but the organisers knew they needed more from him.

Having attended most of the Olympic swimming finals in Rio, I'd experienced what I thought were unbeatable moments as the crowd rose to their feet to celebrate American Michael Phelps' successes.

However, nothing compared to the noise generated by the fans when Dias won his first gold medal (of four in total) on the opening night of the Paralympics.

I still get goose-pimples thinking about it - literally every hair on my arms stood up. The energy was incredible and it is without doubt my highlight of the Games.

Sascha Kindred rolls back the years

Sascha Kindred is a superb sporting ambassador and in his sixth and last Paralympics, the SM6 200m medley was his final chance to win a seventh gold medal.

First there was the drama of his disqualification for a lane infringement and reinstatement into the final. But travelling to the Aquatics Centre for his final on 12 September, we pondered whether, at 38, he could stand on top of the podium once again.

BBC Radio 5 live's Kate Grey, a former team-mate of Kindred, and I watched the race on a TV screen with the rest of the media in the interview zone at the back of the pool.

When he pulled ahead on the breaststroke leg, we could barely believe what we were seeing. Our shrieks got louder on the final freestyle leg and there were tears when his victory in a new world record time was finally confirmed.

Kindred, born with a form of cerebral palsy, strode into the interview area as calm as he always has done. "You've just made women cry," I said to him. He just laughed, modest as always.

Louisa Storey won't forget her first Paralympics Games for a long time - her mum Sarah made sure of that.

The three-year-old was in the crowd as Sarah became the most successful British female Paralympian of all-time at the velodrome, when she won individual pursuit gold - her 12th across two sports.

When Sarah came over to her family on her victory lap, the picture of mother and daughter was destined for the front page of the following day's newspapers.

The British record had been shared with Baroness Tanni Grey-Thompson and there was a warm embrace between the two women when Tanni interviewed Sarah on BBC Radio 5 live after she took the record.

Two further golds on the road mean Mike Kenny's all-time British gold medal mark of 16 is within Storey's reach. You wouldn't bet against her beating it in Tokyo.

I can't think of a more effervescent character in the world of sport than ParalympicsGB flag-bearer Lee Pearson.

He's a showman, who was born to perform and has a horse in Zion who's every bit as unpredictable.

Pearson's ride once threw him off - breaking the athlete's back in four places. "I forgave him," he told me with a smile.

However, such was the worry among British selectors about Zion's temperament that Pearson - at that point a 10-time Paralympic champion - was not selected for the team event, something he took rather personally.

To see the pair defeat the defending champion and favourite Peppo Puch of Austria in the freestyle dressage event was a truly magical moment.

Tears over Will Bayley

I've been interviewing table tennis player Will for the best part of six years and can honestly say he's one of the most likeable characters I've met.

Like many Paralympians he's had his struggles - but few had to go through 12 bone-breaking operations before the age of five, due to his arthrogryposis - and then overcome cancer just two years later.

Perhaps that helped develop the fire you see in Will when he competes. He simply loves to win - and although silver and bronze medals at London 2012 were impressive, for him they weren't enough.

Everything he has done over the past four years was to 'right the wrongs' of the 2012 Paralympic final and to see him achieve that with a stunning victory against not only Brazil's Israel Pereira Stroh, but also the home crowd, was incredible.

I did have tears in my eyes as he jumped up onto the table to celebrate and then moments later there were laughs all around as he jumped down to hug the official who yellow carded him for the 'code violation.' It made no difference, he was the much-deserved Paralympic champion.

Although not exactly a moment, as I travelled around the various venues over the course of the Games, I was struck by the amount of family and friends who had made the journey to Rio to support the British team, complete with specially made flags, T-shirts, costumes or just very loud voices!

All were incredibly proud of what their son, daughter, partner, sibling, grandchild or friend had achieved by getting to the Games - whether they won a medal or not - and were thrilled to have the opportunity to share in their adventure.

"Seeing her change and develop as an athlete has been inspiring for us too," said Annie and Gemma, the mother and wife respectively of Para-canoeist Emma Wiggs when I met them at the athletics stadium a couple of days before Emma won gold at the Lagoa.

The friends and family are those who see the daily grind that allows the rest of us to watch the athletes on the big stage. It also shows that it is not just the team, it is the team behind the team that makes it all happen.

When I met Alan in early 2015 he was not in a great way. He was overweight and resembled the former Brazil football striker cruelly dubbed 'fat Ronaldo'.

His physical demise since the stunning 200m Paralympic defeat of Oscar Pistorius at London 2012 and triple title successes at the 2013 World Championships was startling. 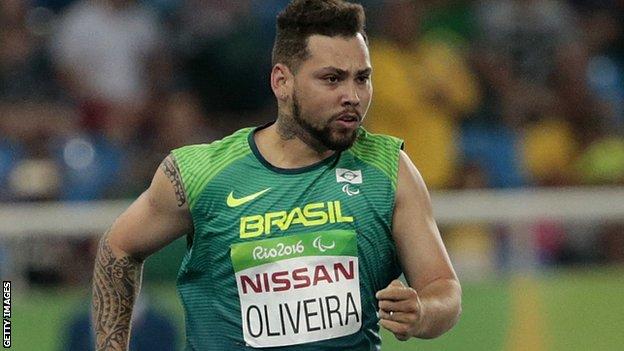 Alan, a double-below-the-knee amputee, had enjoyed his subsequent career break before returning to training in late 2014, but unlike most athletes who retain some level of fitness with lighter work-outs Alan stopped exercising completely.

He was adamant that he would return to top form for the Paralympics and become the home nation's pin-up that he had been dubbed years before. Sadly that did not happen. To see him slump around the track in the 100m and 200m, failing to reach the final was an unbelievably sad sight.

Yes, he won a silver as part of the 4x100m relay team, but he should have been a star of the Games and whatever he goes on to achieve now - his Rio failures will be remembered.

The Weirwolf's four golds were among the highlights of London 2012 but Rio was always going to be different with new stars and rising standards in his wheelchair racing division.

In the build-up, Baroness Tanni Grey-Thompson told me more than once that if Weir won any medal in Rio, it would be a major achievement.

Four times on the track, Weir, who was born with a spinal cord transection that left him unable to use his legs, failed to come away with a medal.

And it wasn't just the GB fans who were disappointed, the British media were also left deflated as medal chances went by.

Weir came into the Games having missed the birth of his fourth child Lenny and in his post-race interviews he struggled to articulate where things had gone wrong for him but hinted that things were not right behind the scenes.

Former Olympic sprinter Allison Curbishley likened it to a cloak of invincibility being taken away from Weir but after the highs of four years ago, this was a real low.

Rio 2016 gave Paralympic debuts to triathlon and sprint canoeing, with both proving not only popular, but worthy additions to the Games that provided plenty of moments to savour.

From a British perspective the team excelled in both - particularly in canoeing where GB women won gold medals in all three their categories, with two bronze medals for the GB men.

Jeanette Chippington's nail-biting victory - by just three one-hundredths of a second - came 20 years after her last Paralympic title as a swimmer and was a particular highlight.

They are sports that show exactly how far disabled sportswomen and sportsmen can push themselves in the pursuit of athletic perfection - something the fans loved to witness and the competitors were proud to demonstrate.