Dame Sarah Storey has become Great Britain's most successful female Paralympian by winning her 12th gold medal on the opening day in Rio.

The 38-year-old Para-cyclist caught compatriot Crystal Lane, who took silver, after only 1,375 metres of the C5 3,000m individual pursuit final.

"Tanni's still a hero to me," said Storey, who competes in the C5 category in which athletes meet the minimum impairment criteria.

"It's amazing and I don't think it will sink in for a very long time, To go quicker than London after having my daughter Louisa is the icing on the cake."

Storey started out as a swimmer and won two gold medals, three silvers and a bronze in Barcelona. She competed in the pool at three more Games before a series of ear infections persuaded her switch to cycling in 2005. 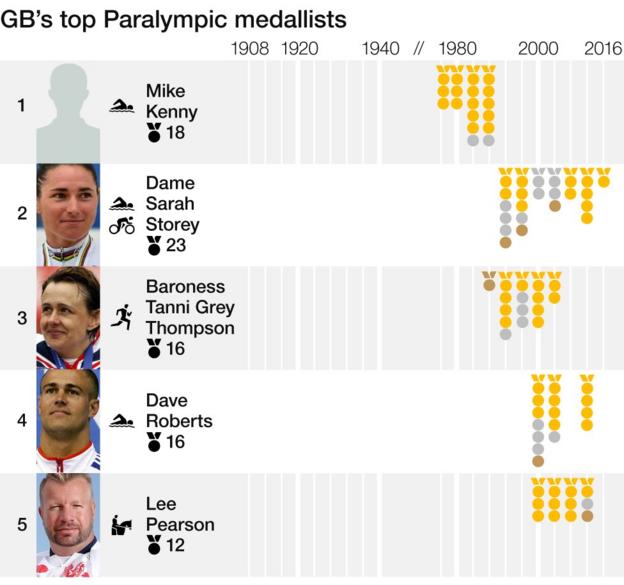 Earlier on day one, Giglia won Britain's first medal with a stunning win in the C1-3 3,000m, catching American Jamie Whitmore after 1,875m.

The 31-year-old, who had a brain haemorrhage and stroke at the age of 27, told Channel 4: "It hasn't sunk in yet. I wouldn't be here without my team-mates, and my back-up team behind me.

"I didn't think I would make it to Rio and I thought it was a bit ambitious but I wanted to give it a go.

"Within the British camp, everyone is hyped up and ready to go. I have another three events, so I will enjoy the races with my legs pedalling as fast as I can."

Four medals and three golds - it's not been a bad one for the GB cyclists on the opening night in the velodrome. Taking up where Wiggins, Kenny, Trott and company left off, they have made almost the best start imaginable.

Storey became the most decorated British female Paralympian in history and credit to silver medallist Lane, who a month ago was not even on the plane for Rio but earned a late call-up thanks to Russia's ban.

Giglia's determination to turn a negative into a positive after suffering a stroke in January 2013 shone through brightly with her gold medal. 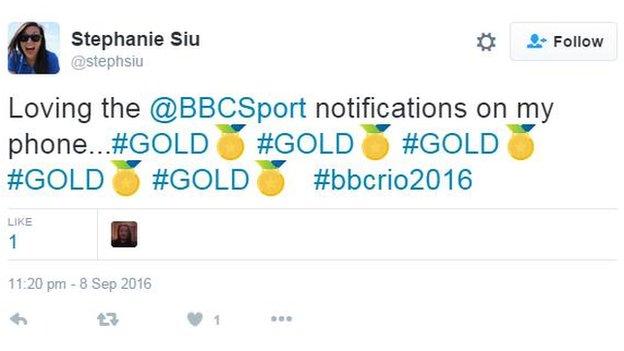 Mansfield-born Hynd set a world record of four minutes 21.89 seconds to win the S8 400m freestyle final - and fulfil his dream of going one better than silver at London 2012.

"There isn't a day that's gone by where I haven't thought about London and it's all been about putting it right," said Hynd, who has neuromuscular myopathy - a condition which weakens his legs.

"I knew I needed to go out and do my own race. Although I'm a little bit disappointed not to go quicker, the gold is the most important thing."

Firth, 20, defended her S14 100m backstroke title by breaking her own world record for the second time in a day. The Northern Irish swimmer triumphed in 1:04.05 seconds, with Applegate coming home in 1:08.67.

Lee, 25, took silver in the SB9 100m breaststroke final, which was won by Dutchwoman Lisa Kruger.

Teenager Mullen finished second in the S5 200m freestyle final, behind Brazil's Daniel Dias who is his country's poster boy of the Games. Dias has now won 11 gold medals from three Paralympics.

Fox failed to defend his S7 100m backstroke title by fractions as he took silver behind Ukraine's Ievgenii Bogodaiko.

What an unbelievable noise from the partisan crowd inside the Aquatics Centre as Dias lived up to his pre-Games hype.

We saw some good crowd numbers and support from the Brazilians on Thursday, but the Games need moments like this to inspire the population.

Brazil - and Rio in particular - has a poor reputation when it comes to supporting disabled people and the Paralympics. Success from athletes like Dias really could be a huge catalyst for change.

Briton Jonnie Peacock began the defence of his T44 100m crown by clocking a Paralympic record 10.81 seconds to win his heat.

New Zealand's Liam Malone was the second fastest in a time of 10.90, with pre-event favourite Jarryd Wallace of the United States third fastest in 11.02.

Hermitage gave up the sport as a teenager but returned after the birth of daughter Tilly in late 2012, having been inspired by watching the London Games.

Both Hermitage and Hahn will be gunning for gold on Friday.

The International Paralympic Committee (IPC) says that - at the last count - 1.7m tickets have been for the Games, 300,000 short of its revised target of two million. In August, Rio organisers said that only 12% of tickets had been sold.

The first gold of the Paralympics went to Kenya's Samwel Mushai Kimani in the men's T11 5,000m, with Brazil's Odair Santos taking silver.

Among the other winners was 50-year-old swimmer Zulfiya Gabidullina, who broke her own world record to claim the women's 100m freestyle S3 title and win Kazakhstan's first summer Paralympic Games medal.

Meanwhile, a Belarus official who carried a Russian flag into the opening ceremony has been banned from the event by the IPC.

Russia are banned from the Games for state-sponsored doping.

And finally, Russia set to top the medal table...

... at their own Paralympics.

The country is currently holding a two-day competition after it was disqualified from the Rio Paralympics over evidence of state-run doping. A similar competition was held for its Olympians who experienced a similar fate.

This unique event will be broadcast by Russian sports TV channel Match TV, who will not be showing any of the action from Brazil, according to privately-owned talk radio Govorit Moskva (source: BBC Monitoring).

Previously Russian state-owned sports news agency R-Sport announced that it would not be sending any of its reporters to Rio in a show of "support" for the disqualified Russian athletes.