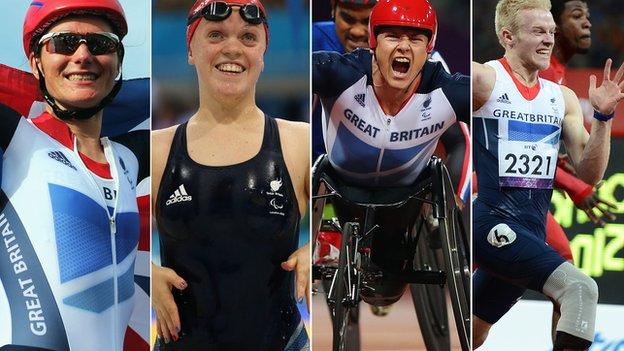 The 2016 Paralympics is set to begin now the Olympics is over and Rio is preparing itself amid controversy over funding for the event, ticket sales and Russia's ban from competing.

Russia will not be allowed to take part after losing an appeal against the ban, imposed after a World Anti-Doping Agency (Wada) report found the country had operated state-sponsored doping.

While there have been a number of issues and uncertainty in the run-up to the event, organisers remain confident it can live up to the success of London 2012.

With two weeks until the opening ceremony on 7 September, can Rio can pull it off?

Wanting to build on the success of London 2012 and Sochi 2014, International Paralympic Committee (IPC) president Sir Philip Craven said the Paralympics "could not ask" for a more vibrant city than Rio.

It will feature the most sports at a Paralympics and a record number of broadcasters will show the Games, with the IPC confident it can beat the 3.8 billion TV global viewers that watched in 2012.

There was a £7.9bn budget for the 2016 Olympics and the Paralympics, lower than London and Beijing, but Rio mayor Eduardo Paes has said 57% of the funds will come from private enterprises rather than public pocket.

By March 2016, however, Craven said he was concerned about low ticket sales and said there were two million tickets available at 10 Reals (£2.35) each.

Last week, a Rio 2016 spokesperson said only 12% of tickets had been sold but that the organisers hoped to sell the majority of the remaining 2.4m tickets available.

Budget and funding: Emergency talks have been held after travel grants worth 8m euros (£7m) were not paid to all 165 participating countries by the end of July.

While the grants, which help cover travel costs for athletes and officials, will now be paid, there are fears that 10 countries may struggle to get teams to Brazil.

An injunction was also lifted to allow up to 65m euros (£56m) from the mayor and Brazilian federal money to be used to fund the Paralympics.

The budget shortfall was created after money intended for the Paralympics had to be used to cover gaps in the Olympic budget.

Has the funding issue been resolved?

Organisers confirmed they were trying to secure a further 150m reals (£35.3m) of funding from Rio Mayor Paes and up to an additional 100m reals (£23.5m) of sponsorship from state-run companies.

With any additional revenue still short of the original plans, the IPC confirmed a number of cuts, which include downsizing the Rio 2016 workforce, changing transport services and closing a number of media centres.

The wheelchair fencing competition was also moved to the Olympic Park from the Deodoro complex, which will see its common public areas outside of ticketed venues closed.

Deodoro Park, however, will host the equestrian, seven-a-side football and shooting, which will be held in three stand-alone venues.

'This will be the People's Games'

IPC president Craven said he wants competitors at the Games to act as "a catalyst for social change".

"The Paralympics has a strong track record for changing global attitudes towards people with an impairment, and are now widely regarded as the world's number one sporting event for driving positive societal change and social inclusion," he said.

"The Rio 2016 Paralympic Games will take place here as planned with all 22 sports.

"They will be the People's Games with tickets available that are accessible and affordable to all Brazilian people, and I am fully confident they will be the best Games ever in terms of athletic performance.

"The opportunity we have here to make Rio, Brazil, Latin America and the world a more equitable place for all does not come around very often, so we have to grab it with both hands."

How will Great Britain do?

The Great Britain team, set a target by UK Sport of finishing second at London 2012 with at least 103 medals from 12 different sports, ended the Games with 120 medals, including 34 golds.

In Rio, UK Sport has set a target of 121 medals, but the British Paralympic Association (BPA) wants to beat London's medal count.

"Initially it is from 113-165 but nothing will give me great pleasure for that team to come back with at least one more than we did in London.

"That would match the great result that the Olympians had in being that great team that comes back from being a host nation and delivering again."