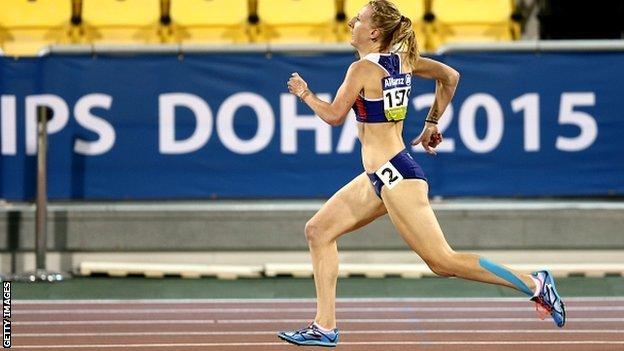 Britain's Georgie Hermitage broke her own world record on her way to winning gold in the T37 400m final at the IPC Athletics World Championships.

The 100m silver medallist started strongly and moved smoothly through the rest of the field in Doha.

The 26-year-old, who has cerebral palsy, left the sport as a teenager but returned after her daughter was born.

"This is more than I could ever dreamed of," she told BBC Sport.

"I never thought I would get a world record. Today was all about getting around and trying to win gold and make the point there is more in me."

Hermitage had set a world best of 1:02.48 at the IPC Grand Prix Final at the Anniversary Games in London in July.

Her training was then hampered by a foot problem but she showed no ill-effects in the Doha heat and, watched by daughter Tilly, stormed through to win Britain's sixth gold of the championships by over three and a half seconds from her nearest rival, France's Mandy Francois-Elie (1:05.55),

"I think I am trying to make up for lost time. I wasted quite a few years doing nothing and I wouldn't do it if it wasn't for Tilly," the Surrey athlete added.

"She is the fire in my belly. When I go out to train at night and I don't want to be there, I know it is days like this when it pays off and she will have these memories forever.

"This has been a good season but I'm trying not to think too much about Rio. I just want to plough on and enjoy winter training.

"It is the ultimate goal but I don't dare look that far ahead, especially when my body is susceptible to injuries. But if it happens then it would be great."

Wheelchair racer Mo Jomni made the breakthrough at world level with a first medal in the T53 200m.

A product of the Weir Archer Academy, which was formed by six-time Paralympic champion David Weir and his coach Jenny Archer, the 26-year-old set a personal best of 26.78 in the heats and finished third behind Canada's Brent Lakatos and Pongsakorn Paeyo of Thailand.

"It's always about the finals - you have to concentrate on the heats and if you are lucky, you get through," he said. "The finals are where you have to put the work in. I always keep it realistic and results come through.

"I came around the bend and the Thai athletes were kicking it on so I had to push it on. I was squinting my eyes and just saying over to myself 'push push push'. To come third and get the medal is awesome, I'm really happy."

Whitehead misses out on 100m medal

London 2012 gold medallist Richard Whitehead is better known for his prowess over 200m and the marathon but narrowly missed out on a medal in the T42 100m, finishing 0.08 outside bronze with a new personal best of 13.55 seconds.

"To be 39 years old and still holding my own against younger athletes is good, but I think it was a bit of a missed opportunity. Although my main task was to get to the final, there are a few athletes missing so it would have been a great opportunity to sneak a medal.

"It's important for me to have confidence going into the 200m, which starts on Tuesday, and hopefully I can continue to push in my main event."

Elsewhere, American leg amputee Richard Browne, who is now based in Cambridge, broke his own world record to claim his first world title in the T44 200m.