With one year to go to the start of the Rio Paralympics, organisers say they expect the Games to break records.

Over the 11 days of competition there will be 528 medal events taking place across 22 sports.

"Our aim is to build on the success of London 2012 and Sochi 2014," said International Paralympic Committee (IPC) president Sir Philip Craven.

"You could not ask for a more vibrant host city. Brazilians are huge lovers of sport."

A total of 3.3m tickets will go on sale on Monday to Brazilian residents, with 94% of tickets costing less than $23 (£15), while organisers hope to surpass the 2.8m tickets which were sold for London 2012.

Monday is a public holiday in Brazil and as part of the festivities, the city's Lagoa Rodrigo de Freitas will stage two 100m races to find the world's fastest female and male Para-athletes with competitors including Ireland's visually-impaired four-time Paralympic champion Jason Smyth and American amputee sprinter Richard Browne.

The Games will feature the biggest number of sports with the inclusion of Para-canoe and Para-triathlon, while the IPC says more broadcasters will be showing the Games than ever before and they are confident of beating the 3.8bn who watched the 2012 Games.

How is the Great Britain team's preparation going?

The GB team is expected to have somewhere in the region of 250 athletes, with 93 slots already secured across 12 sports, but the final team size will not be confirmed until next year at the end of the sports' qualification periods.

The most recent qualifiers were the men's and women's wheelchair basketball teams, who secured their places thanks to their performances at the European Championships in Worcester, and the Para-rowing squad, who secured qualification for four boats through last week's World Championships in France.

Sailor Helena Lucas created history in April when she became the first member of the 2016 Olympic or Paralympic team to be selected for the Games. 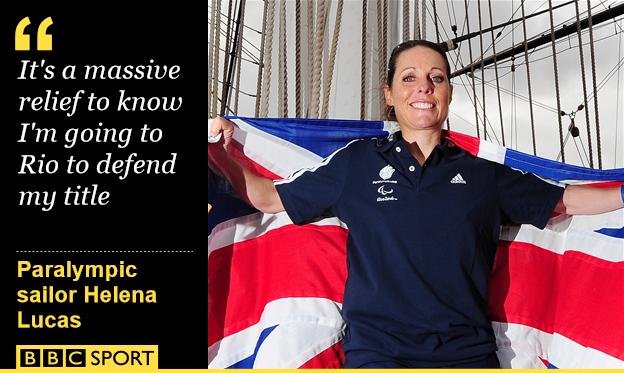 The 40-year-old won gold in Weymouth in 2012 in the single-handed 2.4mR keelboat and will be aiming to be the first sailor to retain a Paralympic title.

The team won 120 medals, including 34 golds, in London to be third on the medal table behind China and Russia and the UK Sport target for Rio is to beat that total having invested over £72m in summer Paralympic sport over the current cycle.

What difference will the Games make in Brazil?

Brazil finished seventh in the medal table in London - their best ever placing - with 43 medals including 21 golds and their athletes will be hoping for a big performance in front of a home crowd in Rio.

Craven believes the Games will have an impact not just in Brazil, where 50m people have an impairment, but across the whole of South America.

Already, Rio is improving accessibility while in July, Brazil president Dilma Rouseff announced new legislation with the Inclusion of People with Disabilities Act and confirmed additional funding for the Brazilian Paralympic Committee (BPC).

"I think the Games have to be a catalyst for change but that change is different from the Olympics," he told BBC Sport.

"When we speak about people with a disability or impairment we're talking about a diversity issue as well because we're trying to change the attitudes towards people with disabilities and who are different. This is something the country needs very much and I think intolerance is everywhere.

"You see this throughout the world, because people hate what is different, and I think the Paralympics has the potential to change the perception and respect the difference."