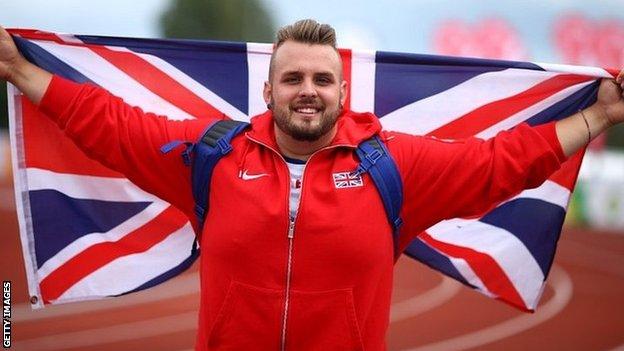 Davies followed up his shot put success earlier in the week to claim GB's 16th gold and 52nd medal overall.

His best throw of 46.46m was over five metres clear of runner-up Tom Habscheid of Luxembourg.

"It was all about getting the medals and I came and delivered and hopefully made a lot of people proud," he said.

On the last day of action there were also silvers for Davies's fellow Welshman Kyron Duke in the F41 javelin and the 4x100m women's relay team for athletes with cerebral palsy.

The quartet of Olivia Breen, Bethy Woodward, Sophie Hahn and Jenny McLoughlin were pipped by Russia but set a new British record of 53.84 seconds.

"We haven't been training long so we are so pleased to come away with a medal," said Hahn, who is the newest member of the quartet after the other three won bronze at London 2012, and comes away from Swansea with three silver medals.

There were also bronzes for 15-year-old wheelchair racer Isaac Towers in the T34 400m and Dean Miller, who finished behind Ireland's Michael McKillop in the T38 1500m.

The performance of the GB team, which finished third in the medal table and beat their target of 30-35 medals, earned praise from head coach Paula Dunn.

"It is nice to see some of the youngsters coming to the fore but also some of our established athletes also getting on to the podium," she told BBC Sport.

"It has been a really good week for the team and I'm happy where we are at this point in the four-year Paralympic cycle.

"We knew Russia would top the table and we would be challenging with Ukraine for second place so all we can do is keep doing what we are doing.

"All but a couple of medals here have come in events which are part of the Rio programme, which is good for us because we wanted to focus on those events."