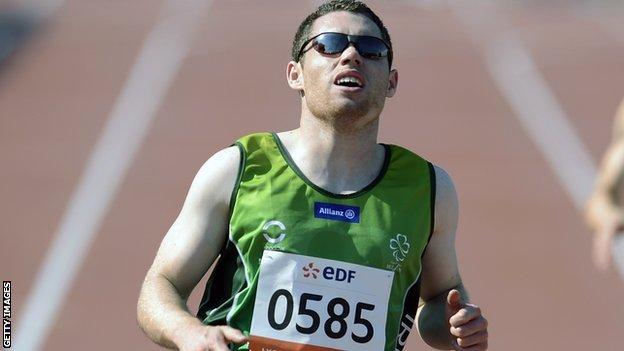 Jason Smyth has been reclassified as a T12 athlete for the 100m and 200m events at the IPC European Athletics Championships in Swansea this week.

The double Paralympic and world champion and T13 world record holder was reclassified due to the progression of his visual impairment, Stargardts Disease, which allows him 10% vision.

"It was not what I was expecting," said Smyth ahead of the championships.

"Just a few days before my competition everything has changed," he added.

Classification is an integral part of Paralympic sport but can often prove confusing.

It provides the structure to separate athletes with similar levels of impairments into groups, or classes as they are commonly known, so they can compete in fair and equal competitions against one another.

"I found it hard to get my head around - the days I am competing have changed, who I compete against..everything.

"It also means since the last time I was classified my eyesight has got worse which is never what you want to hear.

"Saying all that it doesn't change what I want to achieve. I want to run faster, have more success in Paralympic sport and continue to bridge the gap between Paralympic and able bodied sport."

As a T13 athlete Smyth was facing the prospect of only being in a position to defend one of his titles at the next Paralympic Games in Rio as the T13 200m event had been removed from the list of Rio medal events published by the International Paralympic Committee (IPC) last year.

As a T12 athlete Smyth will be in a position to contest two medal events in Rio with a 100m and 200m on the programme.

As with all athletes under classification review Smyth's status as T12 athlete can be protested by other nations once he competes in Swansea or at any competition over the two year period he is under review.

If this were to happen he would be assessed by a second classification panel. Smyth's first race as a T12 athlete will now be the semi-finals of the 100m at approximately 11:00 BST on Tuesday morning.

The county Londonderry sprinter is one of an Irish team of eight in Swansea at these European Championships.