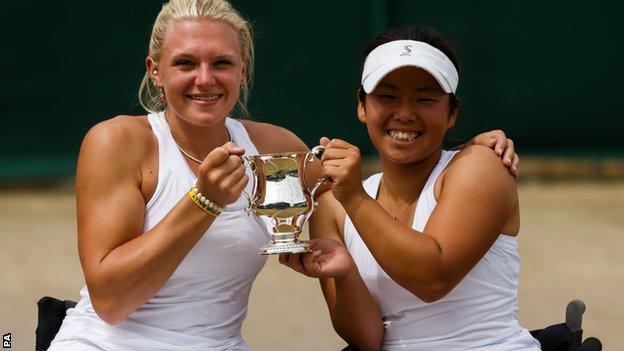 Jordanne Whiley is hoping to create British tennis history after her entry for September's US Open was confirmed.

Whiley, 22, has already won the wheelchair women's doubles at the Australian Open, Roland Garros and Wimbledon alongside Japan's Yui Kamiji.

No Briton has previously won the same event at all four Grand Slams in the same calendar year.

"I'm so excited for the opportunity me and Yui have, to win the set of all four major titles," said Whiley.

Whiley's Wimbledon victory took her to number two in the women's doubles world rankings, directly behind Kamiji, 20, and she is part of an elite field of eight women's players for the singles and doubles in New York from 4-7 September.

In the men's wheelchair draw, Gordon Reid and Andy Lapthorne make up the trio of Britons competing at Flushing Meadows.