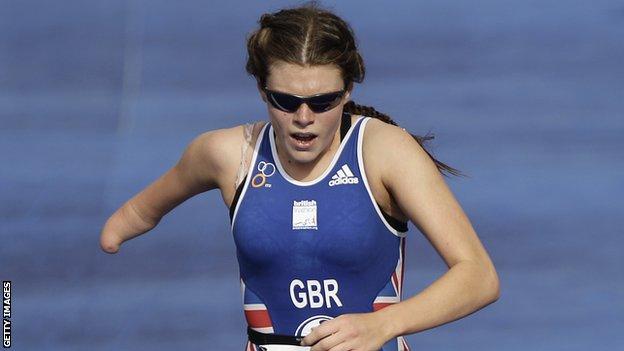 Steadman crossed the line in one hour nine minutes 44 seconds, 2:02 ahead of compatriot McClelland in Hyde Park.

"I just went out to give it my all, try my hardest and hope for the best," Steadman told BBC Sport.

"I beat a four-time world champion, which I never thought would happen this year."

The 21-year-old, who switched from swimming after the London 2012 Paralympics, built up a lead of over two minutes and 30 seconds in the initial swim stage of the Tri4 class for athletes with arm impairments.

McClelland, 35, was unable to overturn that deficit despite being marginally faster over the cycling and running stages, as well as in the transitions.

"I feel a bit numb - gutted obviously - but I did my best. It just wasn't enough today," McClelland told BBC Sport.

"But it's good to have the competition. It's going to push me on more. There are some things I need to work on."

McClelland, who had won each world title in her category since 2010, missed most of 2013's major races while she wrote her university dissertation.

Steadman, who is one of BBC Sport's Paralympic Ones to Watch for 2014, and McClelland battled it out at the recent World Series event in Yokohama, with McClelland triumphing by 11 seconds.

In total there were four gold medals for British athletes, and 11 medals overall.

Also topping the podium were Chris Goodwin and Melissa Reid in the Tri6 category, as well as Jane Egan in the Tri1 class.

Paratriathlon will become a Paralympic sport for the first time at Rio 2016.