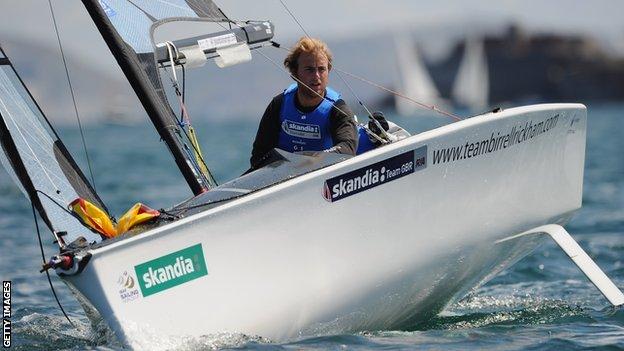 Britain's sailors won two golds and a silver in the Paralympic classes at the Delta Lloyd Regatta in the Netherlands.

Alex Rickham and Niki Birrell secured victory in the Skud class at the second Eurosaf Champions Sailing Cup event of the season.

And Megan Pascoe continued her superb form with victory in the 2.4mR class.

There was also gold for Dylan Fletcher and Alain Sign in the Olympic 49er event, ahead of team-mates John Pink and Stuart Bithell.

The Sonar crew of John Robertson, Hannah Stodel and Steve Thomas were second to France in the third Paralympic class.

Luke Patience and his new crew Elliot Willis also took silver in the men's 470, while Anna Burnet and Flora Stuart took bronze in the women's 470.

Rickham and Birrell, who won the European title last year, won the opening leg of the series in Italy's Lake Garda earlier this month, and the success in the Netherlands saw their unbeaten run extend to five regattas.

"It was tight going into today," said Birrell. "We're building it up, though we made quite a few mistakes this week and with it being so tight we've been able to find out where our weaknesses are, so we'll go back to the coach and work on some of those."

Such was Pascoe's lead she did not need to sail the second of the two scheduled races on Saturday to retain her title.

She finished with five wins from nine races in the five-day series to extend her podium run to four events this year, of which she has won two.

"Retaining my title here is really nice," she said. "It's an amazing place and I seem to really like it."

"I had a bit of luck yesterday, managing to go from fifth to first down the last run which probably shouldn't have gone my way, but it did.

"Sometimes you just have to hold onto your hats and hope everything is going to come out right."