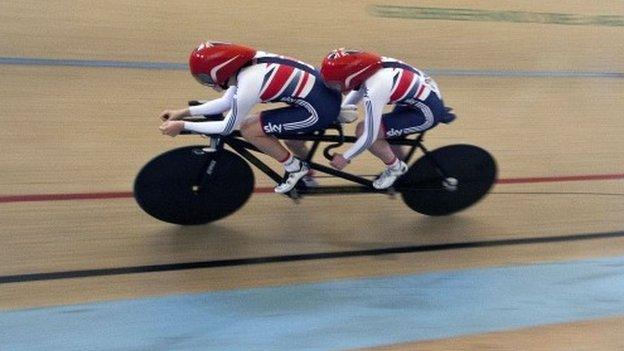 Eleven out of the 12 finishers were all given the same time.

The competition was the first chance to earn qualifying points for the road race events at the Rio Paralympics.

Britain's other team of Rhiannon Henry and Lauryn Theryn were ninth.

"We have gone and done the double, winning the bunch sprint," tweeted Hall. "So chuffed right now."

It brought the GB team's tally to five medals after David Stone won his second bronze of the weekend in Saturday's T2 trike road race.

Stone lost out in a sprint finish to Colombia's Nestor Ayala Ayala and Italy's Giorgio Farroni.

But handcyclist Karen Darke, who won gold in the H3 time trial, crashed out of Saturday's road race and required hospital treatment.

Local favourite and former Formula 1 racing driver Alex Zanardi thrilled the crowds with two golds in his handcycling events and finished with silver in the team relay.