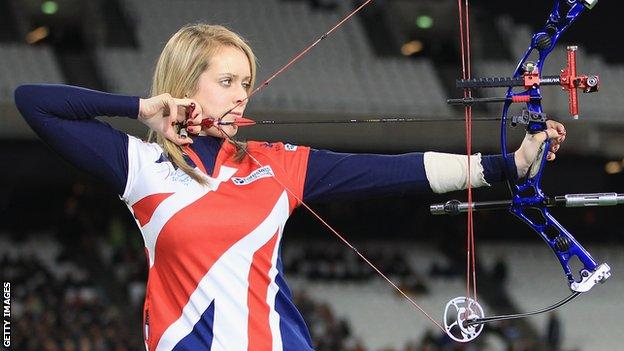 The International Paralympic Committee ruled last year that Brown, who has complex regional pain syndrome in her feet, was ineligible for future Games.

"The Paralympic values of inclusion and equality are out of the window," said the 26-year-old Brown.

She is not the only British archer affected by the new rules.

Both the IPC and World Archery say they have "refined" their rules and are enforcing them more rigorously than in the past.

The IPC also says there is a category for those with "intellectual impairments".

"It seems to be the invisible disabilities they are targeting," said Brown, whose condition gives her chronic pain in her feet.

She uses a combination of crutches and a wheelchair to move around and competes while seated on a stool.

"These rules are going to limit the number of people that can compete at the Paralympics," said Brown, who has given up hope of defending her title at Rio 2016 as she cannot appeal against the decision.

In 2010, she became the first English Paralympian to qualify for an able-bodied Commonwealth team, winning gold in Delhi.

However, her compound bow event is not part of the programme for this summer's Games in Glasgow.

The two-time Paralympian is not interested in switching to the Olympic-approved recurve bow and admits her days in elite competition are over.

Danielle Brown on her disability

"I have chronic pain in both of my feet. I use crutches to get around and a wheelchair for longer distances. Some people have it and are better in a couple of months, but I've had it for 14 years now and there's no sign of it getting any better."

"I fought it as hard and as far as I could," said Brown, whose case was supported by the British Athletes Commission.

"I'm devastated that I won't be able to defend my title in Rio and never expected anything like this to happen."

She has set up a company with her sister Helen, who is studying for a PhD in sports psychology, and plans to mentor young athletes and professionals.

"I spent seven years being the best in the world and was quite good at dealing with pressure," said Brown.

"That's something I'd like to help others with, as well as coping with exam pressure and stress management."

Find out more about Danielle Brown's story on Saturday Sportsday on BBC One at 12:45 BST (19 April).