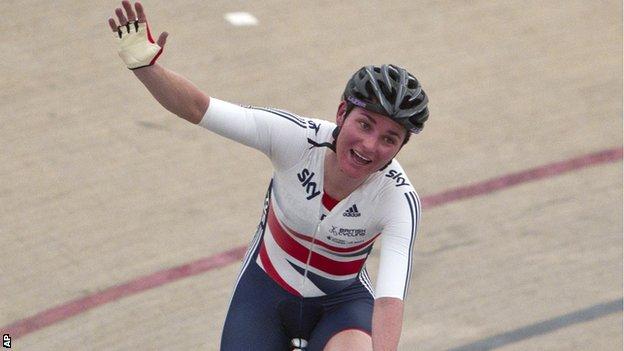 Dame Sarah Storey, 36, won her second gold in Aguascalientes with another powerful run in the 10km scratch race.

Sophie Thornhill and Rachel James took the women's tandem sprint, while Neil Fachie and Peter Mitchell were victorious in the men's event.

Storey, back in action at the championships after giving birth to baby Louisa last June, left the field trailing to cross the line well ahead of Argentina's Mariela Delgado and Jennifer Schuble of the USA, adding to her gold in the C5 pursuit on Saturday.

The 11-time Paralympic champion She also took bronze earlier in the competition in the 500m time-trial.

Who won what for GB in Mexico

"I haven't ridden in a scratch race for quite a while, so to add that to the pursuit gold is just magic."

Thornhill and James, competing in their first major championships, needed only two of the three sprint runs to beat their Australian opponents.

However, they had a nervy wait before their second gold medal was confirmed while consideration was given to an Australian complaint about the type of handlebars used on their tandem bicycle.

"I feel really emotional," said Thornhill. "There were a few issues at the end but it's done now. Neither of us were well, so to think that we can race tired and ill, and still win is amazing."

Fachie and Mitchell, another major championships debutant, won their second gold against Australian opposition - and also did it in two heats.

"Two gold medals and two world records... you can't ask for better than that," said Fachie.

It had been hoped Jody Cundy would be able to add to his gold medal from Saturday's C4 kilo in both the team sprint and the scratch race, but he was forced to withdraw after being struck down by a sickness bug.

His replacement in both events, Jon-Allan Butterworth, was only able to race in the team sprint before he too succumbed to the bug and had to pull out of the scratch.