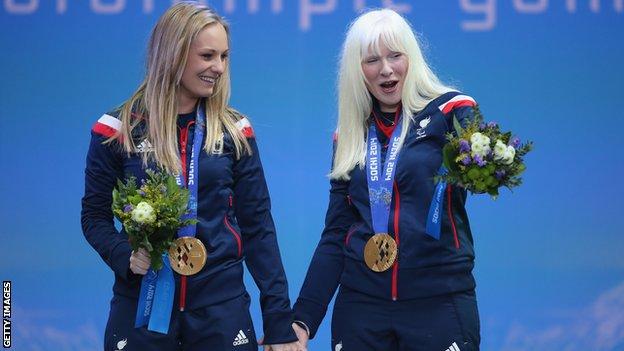 Visually-impaired skier Gallagher, 28, has ruled out any prospect of stepping away from the sport after her Super-G gold in Sochi.

"Everyone keeps asking me my age," a laughing Gallagher told BBC Radio Ulster on Tuesday.

"But I feel as though I'm just getting into this thing."

We are skint, we are less than skint, we have no money

Gallagher, the sole Briton to have won a Paralympics gold, added: "I don't think I will be retiring.

"And I'm really excited about the profile of the sport and the stuff that ParalympicsGB are doing for us in terms of getting the idea of our sport out there."

After four years of scrimping and saving as they aimed for the Sochi Games, both Gallagher and Evans are hoping that their success will open some commercial opportunities.

However, both insist that love for the sport is their primary driving force.

"I love skiing. You couldn't continue in this if you didn't have a love for it," continued Gallagher.

"We are skint, we are less than skint, we have no money.

"We love this sport and I'm so glad that people are getting to see they can achieve whatever they want to achieve through throwing themselves at something."

However, increased funding from UK Sport is set to follow the Sochi success, with the body's medal target of two comprehensively exceeded, given Jade Etherington's four medals.

After winning their Super-G gold, Gallagher and Evans endured disappointment during their remaining three events as the Bangor woman crashed out on each occasion.

However, back on home soil, the duo are now able to reflect favourably on their achievement of winning Britain's first and only Paralympics gold medal.

"Now we have realised what we have achieved. If, four years ago, someone had said that we'd beat the Russians and the Slovakians, it would have been a dream come true," added Gallagher.

The Bangor woman is now looking forward to her homecoming to County Down this weekend.

"We're really excited about that and also looking forward to going to the Sports Institute of Northern Ireland and meeting up with the people who have helped us so much over the last few years."