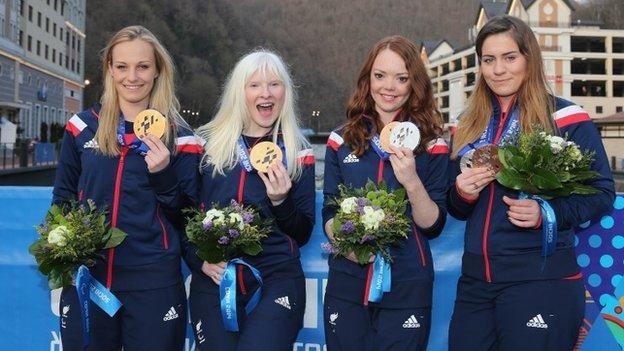 The team came away from Russia with six medals and a top-10 finish in the medal table.

It was their best performance at a Winter Games since 1984 and comes after the team failed to win a medal in Vancouver four years ago.

"It feels like our eyes are now turning towards Pyeongchang in four years' time," said Hollingsworth. "We can kick on and not go there in hope but go there with real ambition.

"London had a seismic effect on the Paralympic movement and we are trying to move on from it but the rest of the nations still want to remind us of how fabulous it was.

"But I think we can now look at Sochi and say the next Winter Games in Pyeongchang has something to build on massively."

Here BBC Sport tries to provide the answers to the questions after what has been described as a "breakthrough" Games.

How have Great Britain performed at the Games?

"It's not just been a good Paralympics, it's been fantastic," ParalympicsGB chef de mission Penny Briscoe said.

The skiers claimed five medals, when their minimum aim was two, while the wheelchair curling team bettered their top-four target by securing bronze.

In the same category, Kelly Gallagher and guide Charlotte Evans ended Britain's 38-year hunt for a first ever gold at the Games. However they finished disappointed after crashing out of their subsequent three races.

While Etherington and Gallagher could both compete at the next Paralympics in Pyeongchang, 15-year-old Millie Knight's two-top five finishes demonstrated her potential for future success and there were also encouraging performances from standing skier James Whitley, 16, and Ben Sneesby, 19, who competes in the sit-ski division.

But Great Britain only competed in two of the five disciplines in Sochi - alpine skiing and curling - and, as well as supporting the existing sports, a major target for the next four years will be to help the sledge hockey team, who failed to qualify, to develop and also find Nordic skiers for cross-country and biathlon events.

What does the GB success in Sochi mean for future funding?

British Paralympians received about £750,000 from UK Sport in the build-up to the Sochi Games - less than 6% of the £13.4m funding bundle their Olympic counterparts attained.

While there are fewer events in the Paralympics, those within the British team are now calling for more support and UK Sport seems receptive to the idea.

"We would expect to increase the investment over the next four-year period."

Disability SnowSport UK (DSUK), which runs the administration side of the team outside of major events and has provided extensive funding in recent years, said it could fold should new investors not come forward.

Briscoe admits DSUK has had a "tough ride" but is confident about its future.

"There was a big increase in interest in Paralympic sport after London by a whole range of stakeholders and corporate sponsors," she said.

"I'm confident there will be the opportunity for everyone to benefit from the success of Sochi."

How successful have the Games been overall?

Concerns were raised late last year about the poor ticket sales, but by the end of the Sochi Paralympics in excess of 300,000 had been sold - 80,000 more than at the previous Games in Vancouver, Canada.

The Sochi Paralympics also set a television first with US network NBC broadcasting the first ever Paralympic event live in North America when it showed USA beat hosts Russia in the sledge hockey final.

Standards are rising across all of the sports and a record 45 nations took part in the Games this time around with Brazil, who will host the next Summer Games in 2014, Turkey and Kazakhstan all making their debut.

The downhill course in Rosa Khutor was criticised early in the Games as warm-weather wreaked havoc and there were also issues at the Laura Cross Country and Biathlon venue where some competitors in the women's biathlon followed the wrong course.

However, most events' progress was unaffected and fans were pleased to see accessibility greatly improved - with the addition of ramps for wheelchair users - following the end of the Olympics in February.

Where do the Games go from here?

Craven said he was "dangerously excited" about the future of Paralympic sport and it is difficult to argue that it is currently enjoying an all-time high in terms of popularity.

However, in order to maintain growth, Paralympic sport needs to continue evolving and adding new events - like the Olympics did so successfully with slopestyle - will help maintain that interest.

Snowboarding made its Paralympic bow in Sochi for those with lower-limb impairments and by 2018 more categories and disciplines will be added to the line-up.

The IPC hopes that by 2022 sliding sports such as adaptive bobsleigh and skeleton will also be added to the programme.

"Sochi has been equal at least to London, in terms of it being a 'breakthrough' Games," Craven insisted.

"It's been fantastic acceleration following on from a very good Games in Vancouver as well, so I am looking forward to seeing what Pyeongchang can deliver in four years' time."