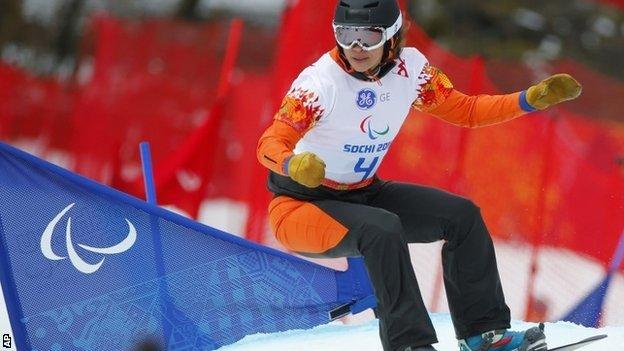 Bibian Mentel-Spee and Evan Strong made history as the first Paralympic gold medallists in para snowboard cross in Sochi.

Mentel-Spee, 41, from the Netherlands, has been the dominant figure in the sport all season and maintained her dominance at Rosa Khutor.

She finished over nine seconds clear of France's Cecile Hernandez-Cervillon.

Strong led home an American clean sweep of the men's medals ahead of team-mates Michael Shea and Keith Gabel.

"I'm over the moon. I'm so proud to be the first male champion and bring it home for my country," Strong told BBC Sport.

The competition saw athletes, who all have lower limb impairments, race individually down the course and negotiate rollers and jumps.

Mentel-Spee was a six-time Dutch national champion in halfpipe and snowboard cross events and was aiming to qualify for the 2002 Winter Olympics in Salt Lake City when she was diagnosed with cancer and had to have her lower right leg amputated.

But she returned to the slopes four months after the operation and became the sport's first world champion last year.

Strong, who was brought up in Hawaii, was a former professional skateboarder but in 2004 he was hit by a car while riding his motorbike and had his left leg amputated below the knee.

"After my accident, snowboarding has given me so much than just racing," he added. "It gave me life again and to be able to share it with the world, that is really special.

"This is my seventh season racing and when I started there wasn't even the idea of Paralympic snowboard, so to see how far it has come in such a short time and see it here in front of the world, I am so proud."

Among the competitors in the men's event was 14-year-old Ben Tudhope from Australia, who is one of the youngest competitors in Sochi and finished 10th.

"Being here so young was such an amazing experience," he told BBC Sport. "Hopefully I can get even better in the future. I was treating it like another competition but to see all this crowd around was brilliant. Snow is my happy place."

Elsewhere, Russia's Roman Petushkov won his fifth gold medal of the Games with victory in the 15km seated biathlon ahead of team-mates Grigory Murygin and Aleksandr Davidovich.

Ukraine claimed a double in the men's and women's 12.5km standing events through Grygorii Vovchynskyi and Oleksandra Kononova.