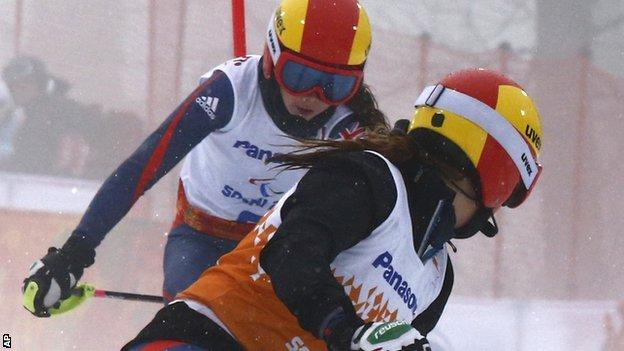 Visually impaired skier Jade Etherington and her guide Caroline Powell say they will "go for broke" in the pursuit of Paralympic gold.

The pair have won three medals in Sochi - two silver and a bronze - the latest for second place in slalom, which they led at the halfway stage.

They are guaranteed another medal if they complete Friday's Super Combined event, but want the top honour.

"It makes me realise how much a gold means," Etherington told BBC Sport.

It is a lot of time to make up, but we're going to go for gold

"We were disappointed not to win today but it was a proper race and we are proud to have the British flag raised once again."

With two rivals disqualified after the slalom section of the super combined race on Tuesday - and gold medal-winning team-mate Kelly Gallagher crashing out - only three pairs will contest for medals when the event concludes on Friday.

Etherington, 23, is currently 3.12 seconds behind Russia's Aleksandra Frantceva, who beat the British skier to slalom gold on Wednesday.

"It is a lot of time to make up, but we're going to go for gold," said Etherington.

"Even if we did one of the best runs we could and we still got silver I would be happy because we'd have pushed it and tried - we'll fight until the end."

Guide Powell, 19, added; "We don't want to go in just to get a medal because we can, we want to go and get the best possible result we can."

Only those who complete the race will receive medals, meaning if all three pairs fell or were disqualified then no-one would finish on the podium.

Britain's Etherington and Powell have so far won silver medals in downhill and slalom, whilst they also finished third in the super-G competition.

After competing in Friday's super combined event Etherington and Powell will return conclude their programme with the giant slalom race on Sunday - the final day of the Sochi Winter Paralympics.