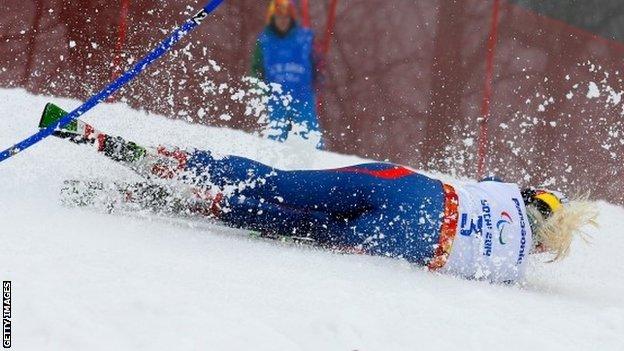 Britain's Paralympic skiing gold medallist Kelly Gallagher's hopes of success in the super combined ended after she fell in the slalom element.

The visually impaired skier took a tumble midway down the course, although she was quickly back up on her feet.

Team-mate Jade Etherington was fourth but was later promoted to second after two disqualifications.

Meanwhile, the GB wheelchair curlers bounced back from a heavy 13-4 loss to Finland by beating Norway 7-3.

Etherington and guide Caroline Powell finished just over three seconds behind leader Aleksandra Frantceva of Russia but moved up into silver medal position after second fastest Henrieta Farkasova of Slovakia and Australia's Melissa Perrine, who was third fastest, were both disqualified.

With only three pairs registering a time in the slalom, it means a clear run by Etherington and Powell in Friday's super-G element will guarantee them a third medal of the Games.

The start of Tuesday's competition had been delayed for four hours because of heavy fog at Rosa Khutor, prompting organisers to postpone the super-G element and move Friday's women's slalom to Wednesday, which was due to be a rest day.

But conditions were tricky for all of the skiers taking part in the slalom race, with rain falling and visibility still poor in places.

"Slalom is a really tough event," Gallagher told BBC Sport. "You're on the edge of your seat and technically I just didn't make it today.

"The conditions are what they are and we were happy to race. It just wasn't to be."

Evans added: "Until that fall it's probably the best that we have ever skied a slalom, so although it didn't happen for us we still have the technical events coming up and we're feeling confident."

Etherington, who clocked a time of one minute 1.8 seconds, admitted that the conditions had been difficult, with the rain falling on her goggles making her already restricted vision more blurred.

"It was quite hard for us to refocus for the completely new discipline and do the slalom course," she said.

"We managed one training run but the conditions in the course were bumpy and the fog and the rain, as well as the lights coming on, made it really difficult."

Of the other Britons, Anna Turney is fifth in the women's sit-ski division with Mick Brennan ninth in the men's division after only 10 of the 26 starters made it down the course.

The curlers had a nightmare against Finland, suffering their heaviest Paralympic defeat and having skip Aileen Neilson replaced by Angie Malone at the halfway point in a tactical call by coach Tony Zummack.

But Neilson returned for the Norway game and the team rallied superbly to record their fourth win out of six games and set themselves up for Wednesday's crucial game against hosts Russia.

GB scored steadily to lead 4-1 after five ends but were given a scare when Norway pulled it back to 4-3 in the next end but Neilson's rink worked hard in the penultimate end to score three and put themselves well in command.

"After this morning we had to dig deep and learn from this this morning and we came out and did that and we got another win on the board," she told BBC Sport.

"We played well and getting the three in the seventh end gave us some breathing space so in the final end we just had to do the maths and get rid of enough stones to make sure of the win."

After the win over Norway, Zummack defended his decision to replace Neilson in the earlier match.

"It was a coaching decision," he explained. "You get paid the big bucks as a coach to make some of those decisions and the athletes get the big bucks to perform and it ended up working out and Aileen bounced back.

"We didn't perform to expectations this morning and this afternoon we dug deep and ground out the win. It wasn't pretty but it did the job."

In the sledge hockey competition, a packed crowd at the Shayba Arena saw hosts Russia beat USA 2-1 to finish top of Pool B but both teams have qualified for the semi-finals.