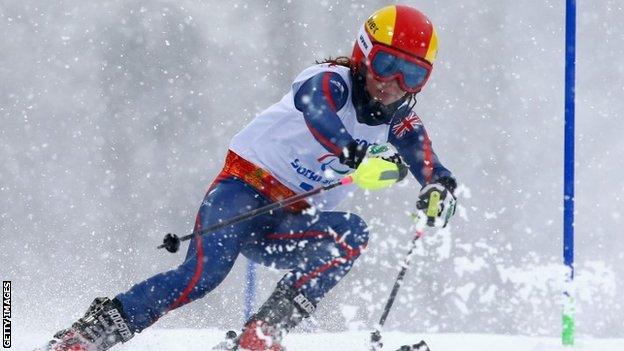 British skier Jade Etherington has won her third medal of the Winter Paralympics with silver in the visually impaired slalom.

The 23-year-old and guide Caroline Powell led Aleksandra Frantceva by 0.55 seconds after the first run, but the Russian produced a stunning second run to win gold by 0.65 seconds.

"It's a shame we didn't complete the set," Etherington told BBC Sport. "It's really annoying not to get the gold, but I'm really happy with the run.

Takes silver in the super-G at the Paralympic Test Event in Sochi.

Silver in the downhill and slalom, and super-G bronze at the Sochi Winter Paralympics.

"I think we skied well but Frantceva just nailed it and we're really happy for her."

Frantceva, 26, who won bronze in the downhill and silver in the super-G, completed her two runs in a combined time of two minutes 1.24 seconds, with Etherington second in 2:01.89 and Slovakia's Henrieta Farkasova taking bronze in 2:02.94.

Super-G champion Gallagher, guided by Clarlotte Evans, was fancied to compete for a medal before her fall in the first run.

The 28-year-old from Bangor in County Down also crashed during the slalom element of the super combined slalom on Tuesday.

"I love slalom and it felt really good in the start gate. I was really excited to be racing with Charlotte and we were working really well, but we need to pick ourselves up and re-focus for the giant slalom on Sunday."

Millie Knight, Team GB's flag bearer and the youngest member of the team, completed both runs and finished fifth.

"It was so amazing," the 15-year-old told BBC Sport. "Yesterday I was so nervous and I was a little nervous this morning, but I inspected the course and was excited to race."

Elsewhere, Britain suffered a 11-2 defeat by Russia in the wheelchair curling. Skip Aileen Neilson's team have won four and lost three of their round-robin matches. They play United States and China on Thursday.