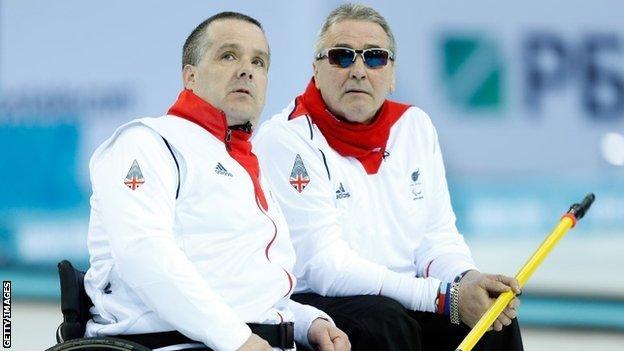 Great Britain's wheelchair curlers recovered from going 2-0 down in the opening end to beat Slovakia 12-2 for a third win out of four in the round-robin phase of the competition.

The team made a shaky start against a side who had won their opening three games.

But with skip Aileen Neilson again in superb form, they dominated after that.

"I came to the party today, which was nice," Neilson, who played a superb 93% in the game, told BBC Radio 5 live.

"All through the competition the guys have been a great support but it is nice when I can come and play the way I know.

"It shows if we play to our potential then other teams are going to have to play really well against us."

Team-mate Gregor Ewan added: "Defeating an unbeaten side gives us an extra boost going into our next games. We just need to concentrate and get on with it."

GB needed to regroup after a disappointing opening end and Neilson led the fightback with a couple of good takeouts as her opposite number Radoslav Duris struggled with his shot selection.

The GB team kept working hard to get points on the board and some sloppy play by Duris gave GB a four in the sixth end to go 10-2 up and there was no way back for Slovakia after that.

Another Duris error in the seventh end, which handed GB another two, was to be the last shot of the match.

The 31-year-old was part of the Canadian Olympic team in Vancouver four years ago but was not selected for his favoured 50km event.

He finished in 52 minutes 37.1 seconds - one minute and six seconds clear of Russia's Stanislav Chokhlaev to bring his overall Paralympic tally to 11 medals.

McKeever was guided by his brother Robin four years ago but this time it was the turn of Erik Carleton for the first half of the race before Graham Nishikawa took over for the second half.

"It's all about my own shape and knowing if I'm going to be half decent or a bag of wet towels," McKeever said afterwards. "You don't know that until you start racing and pushing.

"I needed to save my energy for the second part of the race, especially since the Russians started so quickly. They were 15, 20 seconds ahead.

"That was absolutely the best race I could have laid down thanks to these guys. I'm very proud of that one."