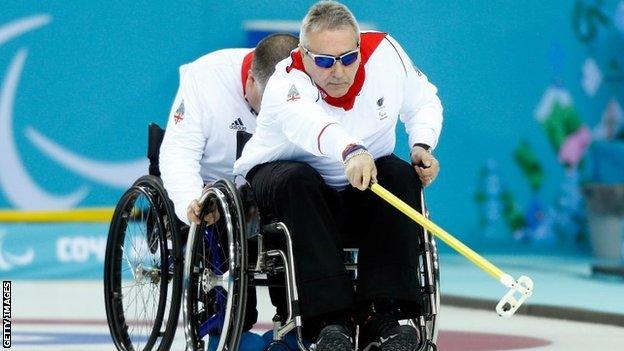 Great Britain's wheelchair curlers won two successive matches on Sunday to get their Winter Paralympic campaign back on track in Sochi.

The team, who lost to Canada in their opening game on Saturday, beat Sweden 6-4 in their first game of the day.

Aileen Neilson's rink then recovered from a mid-match slump to make a late charge and defeat South Korea 8-4.

The wheelchair curlers led Sweden 2-1 at the halfway point of their opening game of the day and had some anxious moments after their opponents scored three in the next end to go 4-2 up.

But a superb steal by skip Neilson in the seventh end followed by an error from the Swedes handed the GB team victory.

Things were equally close against Korea, who led 4-3 with two ends to go, but after some excellent team play in the seventh end, a superb shot by Neilson helped them score five for an 8-4 advantage which the Koreans could not reduce in the final end.

"To come out of the day with two wins was what we wanted," Neilson told BBC Sport. "I'm just delighted that the team worked really hard together. Our dynamics were brilliant and we supported each other.

Britain will face Slovakia, who have won all three of their matches so far, in their next game, on Monday at 11:30 GMT.

At Rosa Khutor, Brennan, who lost both his legs at the knee in a suicide bomb attack while serving in Iraq in 2004 and came to the sport via the Battle Back programme, clocked one minute 30.48 seconds in very testing conditions.

"I had a plan and you always think you could have pushed a bit more in places, but at the beginning of the day I would have bitten your hand off for a top-10 finish so I have to be happy with that," he told BBC Sport.

"The heat hasn't helped the course, it was bumpy in places and people are giving so much to be here so it's disappointing when they can't make it down, but I did and I want to build from here over the next four years."

There was also a second gold for Austria's Markus Salcher, who won the Super-G standing class, while Slovakia's Jakub Krako, guided by Martin Motyka, was victorious in the visually impaired class after winning silver four years ago in Vancouver.

Elsewhere, wheelchair racer Tatyana McFadden, who was born in Russia but adopted as a child by an American woman, finished fifth in the women's 12km seated cross-country race on her Winter Paralympic debut.

McFadden took a tumble during the race but recovered to finish one minute and 43 seconds behind Ukraine's gold medallist Lyudmyla Pavlenko. Silver went to McFadden's American team-mate Oksana Masters, who was born in Ukraine but also adopted by an American.