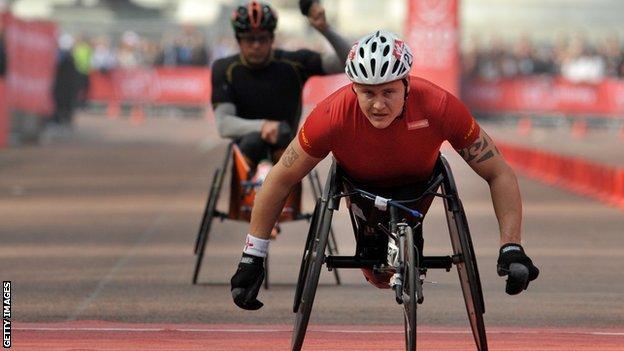 However, in 2013, he only finished fifth and also took a partial break from the sport.

American Tatyana McFadden will head the women's field the month after she makes her Winter Paralympic debut.

McFadden has been chosen on the US cross-country skiing team for the Games, which run from 7-16 March.

After missing last year's IPC World Championships in France, Weir says his hunger for the sport has returned.

"I needed to take the pressure off after the intensity of 2012, and I think I made the right choice to have an easier year," said the six-time Paralympic gold medallist. "I'm not getting any younger.

"I've got that hunger back now, and I've been training really hard again because I still have the desire to overtake Tanni's record. I promised last year I wouldn't stop until I've done it, and now I'm fired up to win again."

Weir's main rival is likely to be Switzerland's Marcel Hug, who won five gold medals at the IPC World Championships, including the marathon, and followed that up with victory in New York. And 2010 London champion Josh Cassidy from Canada and nine-time Boston Marathon winner Ernst van Dyk, from South Africa, will also challenge.

The main wheelchair races will again form part of the IPC Athletics Marathon World Cup, an event for para-athletes.

The World Cup this year features seven races in all, including a new men's wheelchair contest for racers in the T51 and T52 categories, while Paralympic T42 200m champion Richard Whitehead will compete in the leg amputee race.