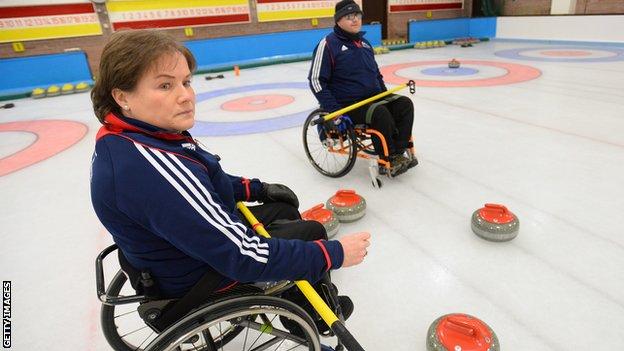 Great Britain wheelchair curling skip Aileen Neilson has praised head coach Tony Zummack for the impact he has made on the team as they look to challenge for a Winter Paralympic medal in Sochi.

GB finished a disappointing sixth at the 2010 Vancouver Games, four years after winning silver in Turin.

But Neilson is positive about their chances of success in Russia in March.

"Tony has introduced a lot of new aspects - both technically and tactically," she told BBC Sport.

"I know I feel a much more confident player and a much more technically able player. He has worked really hard to make us the best we can be.

"I've gained a lot more experience since Vancouver, which was my first Games, the whole team has, and I'm sure that will help us too."

Since taking over as head coach three years ago, Canadian Zummack, a former ice hockey player and able-bodied curler, has worked in training sessions to improve the team's game play and the team dynamics.

GB have won medals in all five major international tournaments they have played in so far this season in the build up to Sochi, and Zummack thinks that is an encouraging sign as to what they could achieve at the Winter Paralympics.

"You're always going to be cautiously optimistic," he said. "I think if you look at our track record right now, it's very, very good.

"That doesn't mean we're guaranteed to execute that going into the Games, but I think if we stay focused on the processes then our medal opportunities are as good as any of the other teams going into the game."

At the Olympics, Great Britain have both a men's and women's team, but at the Paralympics there is one mixed team - and although Neilson is the only female skip among the elite nations, she does not believe her gender makes any difference in leading her team.

"I think the great thing is in some of the competitions that we've been at lately," she said. "I've looked across the ice and there were two other females skipping, and I think there will be more females that will be skipping in the future."

GB play tournament favourites and defending champions Canada in their opening match in Sochi on 8 March.