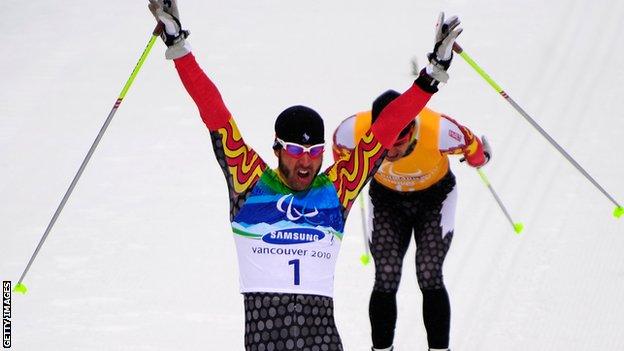 Canadian cross-country skier Brian McKeever is giving his Olympic dream a final chance at this week's national trials in Alberta.

McKeever, 34, created history in 2010 by becoming the first man to be selected for both the Winter Olympics and Paralympics in the same year.

However, the visually-impaired skier was not chosen for his favoured 50km distance race at the Olympics.

This time he is again hoping to reach the team for the distance events.

The Canadian team have one distance vacancy and one sprint vacancy left on the men's team which will be filled at the trials, ahead of the team announcement next Tuesday.

McKeever, who won three Paralympic golds on home soil four years ago, will be hoping to shine in Sunday's 30km trial race and put himself in line for the distance vacancy.

He was diagnosed with Stargardt's Disease when he was a teenager and soon lost most of his sight.

However, he continued cross-country skiing and made his Paralympic debut in 2002. He has gone on to win nine Paralympic medals, including seven golds, in the cross-country events from 1km to 20km, plus a biathlon bronze while being guided by elder brother Robin.

He warmed up for this week's races at his home resort in Canmore with wins at the same resort over 10km and 20km at the International Paralympic Committee World Cup at the start of December, despite his new guide Erik Carleton being hampered by illness during the event.

At last year's IPC Para-Nordic World Championships in Sweden, McKeever and Carleton won golds in both the 1km sprint and 20km events.

"Even when I retire, I'll watch the Olympic trials and wish I had another shot at it," said McKeever in an interview last autumn. "You just want to be out there and race at that level.

"As we see again and again, it's the moment of it. Anything can happen. It's not always the best athlete who wins. It's the best skier on the best skis with the best wax on the right conditions; it's all those factors.

"That's what keeps athletes dreaming big, whether they're ranked 1 to 33.