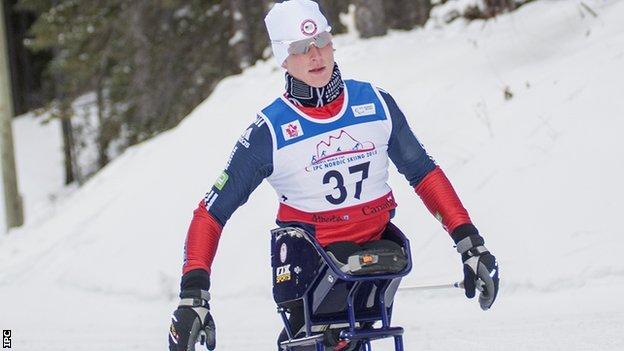 Around 600 competitors from 44 countries will take part in the Sochi Winter Paralympics, which begin on 7 March.

Some of the athletes have made the switch from summer to winter sports while others are winter specialists.

Here, BBC Sport looks at some of the competitors who will be competing for medals on the snow and ice in Russia as the Paralympics are held in the country for the first time.

The woman known as The Beast has found a new challenge and hopes to transfer her wheelchair racing prowess to earn success in cross-country skiing, where she will compete in a sit-ski.

McFadden, a 10-time Paralympic medallist, swept all before her in wheelchair racing in 2013, winning six golds from 100m up to marathon at the IPC Athletics World Championships in Lyon and also claiming the marathon grand slam of Boston, London, Chicago and New York.

But the 24-year-old, who was born with spina bifida before being adopted from a Russian orphanage age six by American woman Debbie McFadden, now has a new challenge after taking up nordic skiing last season.

She has regularly been in the top 10 in this season's World Cup events with fifth place in the 1km sprint event in January's World Cup finals in Germany a particular highlight.

McFadden is set to compete in both the cross-country and biathlon events and her birth mother will be among those cheering her on as she chases another Paralympic medal. 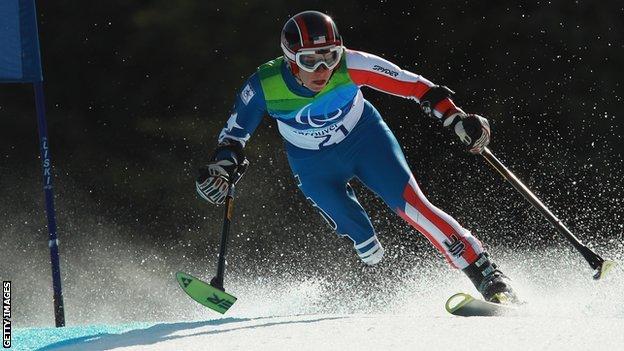 Jones is one of a select group of athletes to have won gold medals at both summer and winter Paralympics and another dual-sport star who is hoping to star in her seventh Games.

The 29-year-old, who was born without a right femur and had her leg amputated when she was six years old, made her Games debut as a skier in 2002 and also competed in 2006 and 2010, but she is also a three-time summer Paralympian as a para-cyclist.

On the slopes she has won a gold and two silvers while, after a silver in the Velodrome in Beijing, she won gold and two bronzes at London 2012 and also won double gold at the World Championship in Canada in 2013.

She also earned two victories at the 2013 US Paralympics Alpine Skiing National Championship in slalom and giant slalom and that success has carried on into this season where she has regularly finished on the podium.

Her rivalry with Frenchwoman Marie Bochet and Germany's Andrea Rothfuss is set to be one of the most keenly contested on the Sochi slopes. 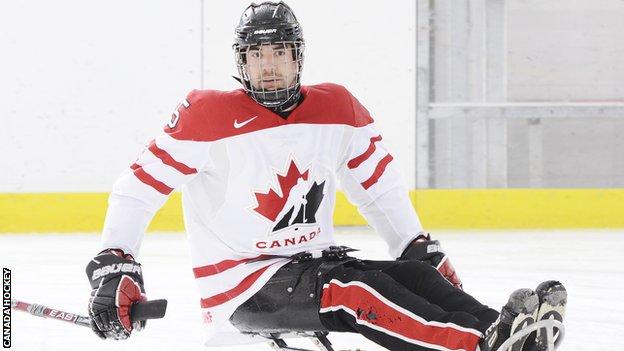 Rempel's journey from dirt bike rider to sledge hockey star has been remarkable.

In 2002 he watched on as his father fell from a hide in a tree and was left paraplegic, and four years later a crash on his dirtbike left him paraplegic and doctors told him he would never walk again.

His father struggled with his paralysis and later killed himself, but Kevin eventually learned to walk again and even rode his dirt bike again.

After playing able-bodied hockey for 14 years, he discovered sledge hockey in 2008 and made his international debut in October 2010 in a series against the United States and he is now a regular on the team.

He won bronze with Canada at the 2012 World Championships in Norway and was part of the squad which won gold in the 2013 Worlds, where they beat the USA 1-0 in the final.

So far this season, Rempel has helped the Canadians to a win in the 2013 World Sledge Hockey Challenge, finding the net against both Korea and Russia. 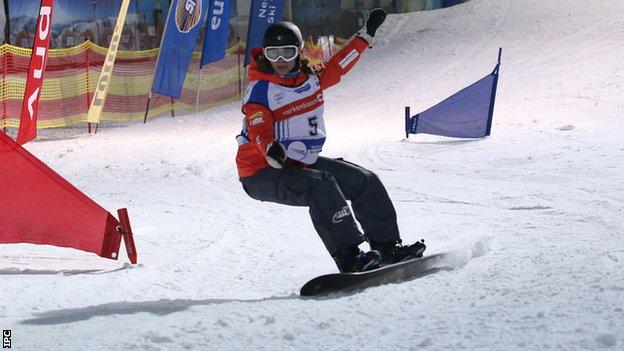 With snowboard making its Paralympic debut in Sochi, Dutch star Mentel-Spee will be hoping to create history as the first female gold medallist in the sport.

Mendel was a six-time national champion in halfpipe and snowboard cross events and was aiming to qualify for the 2002 Winter Olympics in Salt Lake City when she was diagnosed with cancer and had to have her lower right leg amputated.

However, she did not let that stop her and four months later she was back in action and was soon a Dutch champion once again.

The news that the sport would be part of the Paralympic movement gave Mendel, who has a masters in sports management and as well as competing also coaches some of the other athletes on the national team, a huge boost in confidence.

She claimed a comfortable win in the IPC Alpine Skiing Snowboard Cross test event in Sochi last March with a time that would have earned her a silver medal in the men's race.

This season she beat American rival Amy Purdy on home soil in Landgraaf and then followed that up with more successes in both races at Copper Mountain and Canada to claim the overall World Cup title. She goes to Russia as a big favourite for gold. 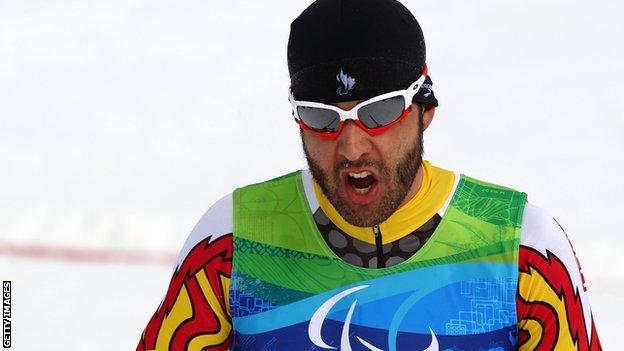 Having just missed out on a place at the Sochi Olympics, McKeever will be aiming to add to his seven Paralympic golds in March.

McKeever started skiing when he was three but was diagnosed with Stargardt's Disease when he was a teenager and soon lost most of his sight.

He made his Paralympic debut in 2002, carrying the Canadian flag at the closing ceremony, and has gone on to win nine medals in the cross-country events from 1km to 20km, plus a biathlon bronze while being guided by elder brother Robin.

He finished 21st in the 15km free event at the 2007 World Ski Championships in Japan and, four years ago, he created history by becoming the first man to be selected for both the Winter Olympics and Paralympics in the same year but selectors did not choose him for his favoured 50km distance race at the Olympics.

In January he again tried to make the Canadian Olympic team but although he won the 15km race at their trials, he was eighth in the 30km race and missed out on a place

But he is a dominant figure in Paralympic cross country and at last year's IPC Para-Nordic World Championships in Sweden, McKeever and new guide Erik Carleton won golds in both the 1km sprint and 20km events and this season he has enjoyed World Cup success, despite Carleton being hampered by illness during the season. 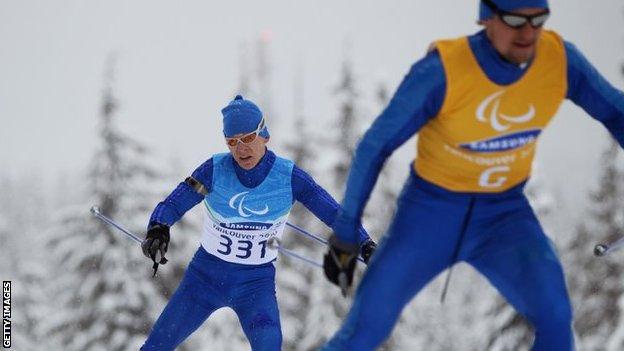 Russia will be hoping for plenty of medal success as hosts of the Winter Paralympics, and Nikolay Polukhin will hope to be one of their biggest stars.

The 31-year-old, who is visually impaired, won the most medals at the 2010 Vancouver Games with six - one gold, four silvers and a bronze - and he and guide Andrey Tokarev will be hoping to dominate again in front of a home crowd.

After his success in Vancouver, Polukhin, who is a keen chess player, followed that up with seven medals on home soil at the 2011 Nordic Skiing World Championships in Khanty-Mansiysk across both cross-country and biathlon.

While Brian McKeever has the edge on Polukhin in the cross-country events, the Russian is the dominant figure in the biathlon.

He won three golds at the 2013 World Championships in the 7.5km, 12.5km and 15km events and has brought that form into this season with golds in World Cup races in Canmore, Canada and Vuokatti in Finland to top the Biathlon World Cup standings. 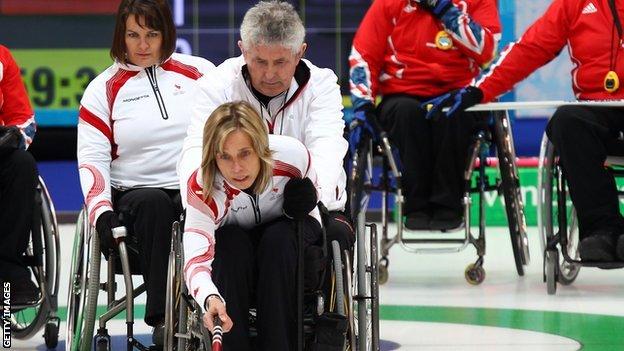 Canada are chasing a third consecutive wheelchair curling Paralympic gold medal and Sonja Gaudet will be a key figure as they bid to chase history.

The 47-year-old from British Colombia was left paralysed after a fall from a horse nearly 14 years ago but, after her accident, she was keen to continue playing sport and discovered wheelchair curling by chance when she was asked to give advice on a wheelchair accessible washroom renovation at her local curling club.

She was selected on the Canadian team for the 2006 Games in Torino where her side won the sport's first Paralympic gold after beating Great Britain in a tense final which went down to the final stone and, four years later, she won another gold in front of a home crowd at the Vancouver Games.

As well as two Paralympic titles, Canada have won three world titles in 2009, 2011 and 2013 with the 2013 event serving as a Paralympic test event where they won nine out of 11 matches.

Gaudet is Canada's most decorated wheelchair curler and, in the summer of 2013, she was the first ever wheelchair athlete inducted into the Canadian Curling Hall of Fame.