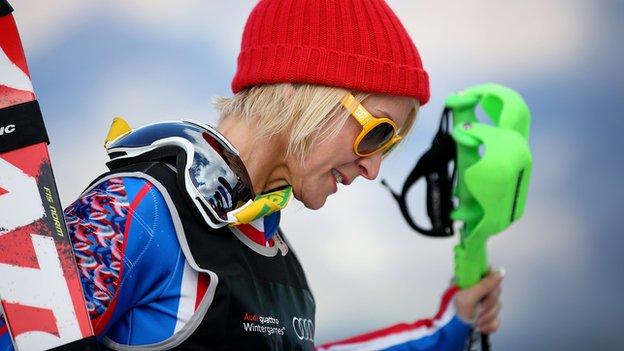 Mills, 45, abandoned her dream of competing at the 2014 Sochi Winter Paralympics on Monday after the IPC ruled the device ineligible.

"I was told that my leg was completely fine, that it didn't pose any problem," said Mills in a video statement.

The IPC deny Mills was ever given permission to compete on the device.

"No adaptive equipment paperwork was ever submitted or received and therefore it [the prosthetic leg] was never formally approved," said IPC spokesperson Craig Spence.

Mills, who lost the lower half of her left leg after a collision with a police motorbike in 1993, was competing at the Pitzal Europa Cup event in Austria on Monday when race officials noticed she was skiing on a different device to that which had been approved by the IPC in July.

The former wife of musician Sir Paul McCartney attended a meeting for race officials and team coaches that evening against the wishes of the British team and it is claimed she "threw a tantrum" after being told by IPC technical official Sylvana Mestre that the device would have to be revised.

An IPC statement, backed up by Mestre herself, alleged that Mills then "physically harassed" the official - something the former model strongly denies.

"I just said to her very loudly - I was very upset I have to admit - that I'd had enough of this and wouldn't be involved in these ridiculous rules."

In July, all athletes with adaptive skiing equipment - such as Mills - were asked to submit their device specifications for assessment.

The limb Mills was using was approved, but she subsequently switched to a new device created by the London Prosthetics Centre.

Mills says that IPC technical committee head Marcus Walser gave her permission and while no official paperwork has ever been submitted, she alleges Mestre raised the issue because she "had it in for me".

That claim has also been rejected by the IPC. Spence said: "The IPC refutes any allegations that Sylvana [Mestre] 'has it in' for Heather Mills. She [Mestre] is one of the most highly respected officials by athletes."

Mills, who says she will not conduct any media interviews in the immediate future, released the video statement to "clear a lot of the mis-reporting up".

The Sochi Winter Paralympics begin on 7 February next year and Britain is expected to name 57 athletes.

Mills does not expect a return to the set-up before the Games.