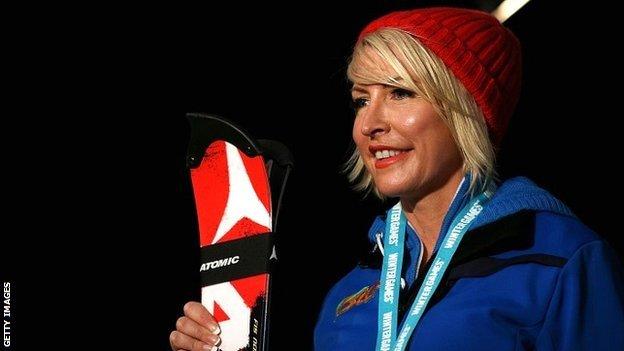 The International Paralympic Committee (IPC) says it may take disciplinary action against Heather Mills after alleging she "verbally abused" and "physically harassed" an official.

Mills, who lost the lower half of her left leg in 1993, said on Monday she would not ski at the 2014 Sochi Paralympics after the IPC ruled her equipment had not been ratified.

The IPC claims Mills went into a "wild tantrum" after being given the news and could now be fined. Her coach says there is a "vendetta" against her.

"I was trying to explain to her that this is not the equipment we approved earlier in the year and then that was it, she exploded," said Mestre.

"She jumped on me. She started to say I was a bitch. She grabbed me from the back and she started to say that 'you don't know who I am, I will make your life miserable'. I don't understand the reaction."

A representative of former model Mills issued a statement in response, denying Mestre's and the IPC's version of events.

It read: "Heather waited patiently - as the IPC confirmed - to try and explain to Sylvana Mestre that her left boot was legal and purely cosmetic to abide by the archaic IPC rules. It was just cut down and the buckles removed to stop more weight limb damage."

The statement also claimed Mestre had shouted at Mills and would not let the GB coach the opportunity to "speak or explain" before storming off.

Mills's own coach, John Clark, plans to make a formal complaint about the behaviour of Mestre, claiming there is a "vendetta" against Mills and that Mestre had "deliberately put barriers in the way" of his racer.

In an email seen by the BBC, Clark has also called for Mestre's dismissal, but IPC spokesperson Craig Spence blamed Mills entirely.

"It was harassment," he said. "It was absolutely disgraceful behaviour."

In July, all athletes with adaptive skiing equipment - such as Mills - were asked to submit their device specifications for assessment.

The device Mills was using was approved, but she subsequently switched to a new limb created by the London Prosthetics Centre.

The IPC wanted her to wear a new boot cover over the prosthetic, but Mills said that requirement resulted in "unnecessary weight" and "intolerable pain" on her limb.

When the IPC discovered at the Pitzal Europa Cup event in Austria on Monday that Mills was not complying with its ruling, it held a meeting with coaches and race officials to discuss the issue.

The IPC said it was willing to work on the new device with the skier and did not plan to annul her previous results.

However, Spence claimed Mills "started to verbally abuse" Mestre when the IPC chief tried to explain the IPC's stance.

He insisted the IPC was not looking to ban Mills, the former wife of musician Sir Paul McCartney, from future competitions, but said it will now take the matter to the IPC's legal and ethics committee.

"It is likely we will sanction the athlete and this will incur a fine of between 500-1,000 euros," he said.

Mills, who lost the lower half of her left leg following a collision with a police motorbike in 1993, has already resigned from the British skiing programme and does not intend to compete in Sochi.

Her management company claim an unfair IPC regulation had forced her withdrawal. The IPC denies those claims.