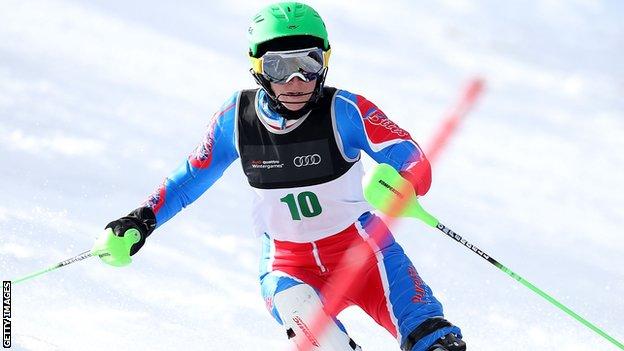 Former model Heather Mills criticised the International Paralympic Committee after abandoning her attempt to qualify for the British ski team for the 2014 Sochi Winter Games.

Mills, 45, is "devastated" after ruling herself out because of an injury her management company claims was a result of an unfair IPC regulation.

However, the IPC said she was competing on equipment it had not authorised.

It added: "We have to enforce the rules regardless of who the athlete is."

Mills had her left leg amputated below the knee after a collision with a police motorbike in 1993 and joined the British development ski team in 2010, winning a World Cup silver medal earlier this year to put her in a strong position for a place in the team for Sochi.

However, she has struggled with injuries throughout her qualification campaign, particularly when learning how to slalom for the first time, which regularly resulted in her being 'ejected' from her prosthetic leg.

A new design, created by the London Prosthetics Centre this summer, helped stabilise the problem.

But her management company said she was forced by the IPC to wear a new boot cover over the new prosthetic, resulting in "unnecessary weight" and "intolerable pain".

It added the new cover, which locks to her left leg below the knee, creates a much larger amount of friction and has caused painful inflammations which needed to be drained frequently. This led to bleeding, blistering and a painful blood cyst, which means she can no longer continue.

Mills said she was told by IPC sport technical committee chief Sylvana Mestre she would be disqualified if she did not comply with the ruling.

IPC spokesman Craig Spence said: "On 1 July, we sent a memo to all countries asking them to submit their adaptive equipment for each skier for the forthcoming year.

"We cleared the prosthetic leg Heather was using then, but when we saw the new boot this week, we realised it was different and that she should not have been racing on it.

"It's a real shame because she has made such great progress this year."

Mills's spokesperson added: "We cannot believe she was told she would be disqualified for not wearing cosmetic, non-functional buckles on her ski boot.

"We feel very saddened that all her hard work, injury, struggles, and the overcoming of them, has come to her having to resign because of a bureaucratic decision that would lead to further pain and injury.

"Although her hopes and dreams for Sochi are now over, Heather hopes to one day compete in winter sports when the IPC re-evaluates the unfair systems it has in place."

In a joint statement, the British Paralympic Association and British Disabled Ski Team said: "Occasionally in sport, equipment issues arise, especially with adaptive equipment and the interpretation of the rules in relation to its use.

"Therefore we are all saddened that she has decided to retire at this stage, rather than working with BDST and IPC Skiing to resolve the issue.

"Heather has shown determination and made great progress over the past few months and is to be commended for the success she has had in her skiing career."

The GB skiing team for the Sochi Games, which begin on March 7, is due to be confirmed in January and is expected to include between five and seven athletes.