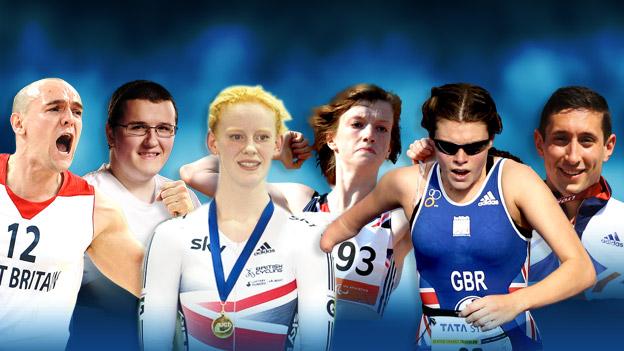 Britain's top disabled athletes had another successful year in 2013 as they start the build-up to the Rio Paralympics in 2016.

And with a Winter Paralympics on the horizon, plus World Championships in sports including track cycling, wheelchair basketball and para-dressage, plus a number of European Championships and some para-sport events in the Commonwealth Games in Glasgow, there are plenty more opportunities to shine.

Here you can find out more about the Ones to Watch for 2014. 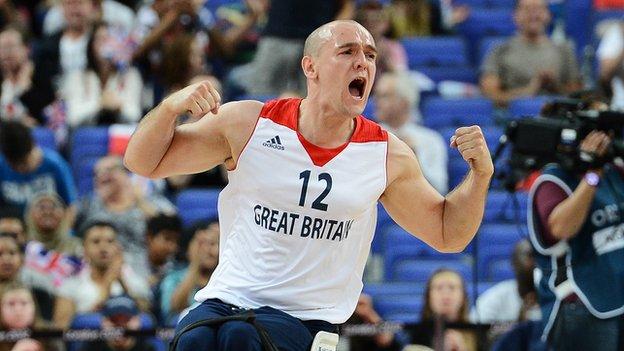 2014 aims: To win gold at the World Championships and continue winning with club side Cantu.

Ian Sagar broke his back in a motorcycle accident aged 17 and had a brief introduction to wheelchair basketball while in hospital. A couple of years later when working as a sports wheelchair salesman he returned to the sport.

After narrowly missing out on a place in the Great Britain team for the 2008 Beijing Paralympics, he is now a key part of the GB set-up and in his second year based in the north of Italy, playing professionally with club side Cantu.

Ian Sagar away from sport

After spending Christmas in his native Yorkshire, Sagar will return to Italy for a hectic schedule, including club games until the end of May and the build-up to the World Championships in Korea in early July.

Great Britain have not won a world Championship medal since 2002, when they were runners-up to the United States. 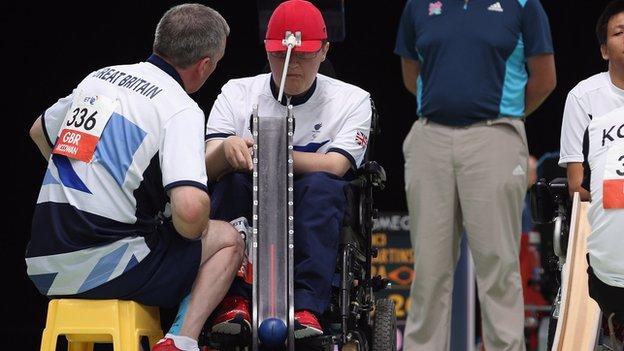 2014 aims: Pairs and individual success at the World Championships in China in September.

Boccia is a family affair for Scott McCowan, with younger brother Jamie also in the GB squad.

McCowan, who is in his final year of studying psychologies and sports studies at Stirling University, has Duchenne Muscular Dystrophy - a degenerative muscle wasting condition. He has been a wheelchair user since he was nine.

He came to the sport via a "try it out day" and realised that he had a talent. Boccia is similar to boules, relying on technical skill and accuracy to throw the 275g boccia balls as close as possible to the jack.

Scott McCowan away from sport

McCowan's condition means he is unable to throw the boccia balls himself, so he competes with the help of a ramp assistant who sits with their back to the court and acts solely on his instructions to adjust the assistive ramp. His father fulfils the role at major international competitions.

McCowan made his major international debut at the 2009 European Championships in Portugal and, along with BC3 team-mates Jacob Thomas and Jess Hunter, reached the group stages of the pairs competition at London 2012 on their Paralympic debuts.

The trio continued their hard work in 2013, winning European pairs bronze - a first major championship medal in the category in 17 years - while McCowan finished seventh in the individual event.

He says: "The fact that I knew boccia was something I could do competitively was a big driving force for me. I've always wanted to compete at international level but never thought it would be possible. It is the competition that drags me on to be the best player I can be on the day." 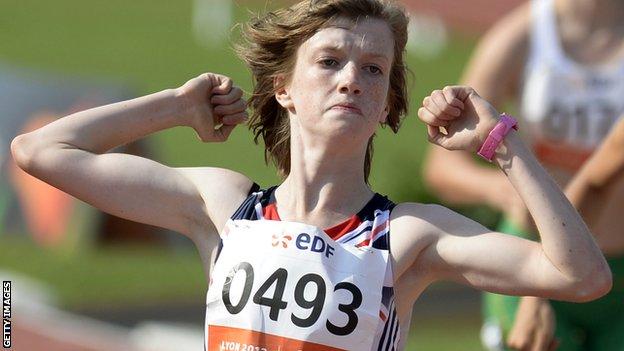 2014 aims: To keep running fast and win 100m gold at the European Championships this summer.

Sprinter Sophie Hahn burst onto the scene in 2013 with a gold and silver medal at the IPC Athletics World Championships in Lyon.

Hahn, who has cerebral palsy, watched the London Paralympics on television and it was older brother Jamie who encouraged her to join Charnwood Athletics Club under the tutelage of coach Joe McDonnell.

Hahn had previously run in some schools events but her progress in McDonnell's training group, which also includes London Paralympian Sam Ruddock, has been rapid.

Sophie Hahn away from sport

Hahn went to the World Championships in Lyon as one of the newcomers on the GB squad and won a shock silver in the 200m behind fellow teenager Veronica Hipolito. She then beat the Brazilian, 17, in the 100m final with a new world best of 13.10 seconds.

Hahn is combining training with her college course in animal and equine studies at Brooksby Melton College in Melton Mowbray.

However, on the track, Hahn has a fresh challenge to deal with as her category has lost the 200m. That means that, along with her favoured 100m, she has to work on perfecting her 400m, starting at the European Championships in Swansea in August.

She says: "I couldn't have expected that much in my first season. I just want keep training hard and see how my times can get quicker. It's all a bit of a shock to see how fast I am running this year compared to this time last year." 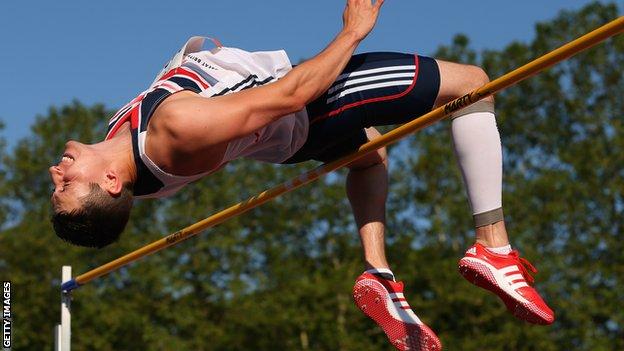 Age: 25 From: Reading, lives in Loughborough

Jonathan Broom-Edwards had been playing able-bodied basketball at Loughborough University, alongside studying aeronautical engineering, when he and a friend decided to try high jump to help with his basketball leaps.

Since birth, Broom-Edwards has had a condition called Talipes Equinovarus, a deformity of his left foot. He also has issues with his right foot, an unstable right knee, and muscular imbalance throughout his body. It was only after the London Olympics that he realised his impairment made him eligible for Paralympic competitions.

Jonathan Broom-Edwards away from sport

After getting classified, he has put basketball to one side and is concentrating on the high jump, working in Loughborough alongside Olympic bronze medallist Robbie Grabarz.

In his first major international competition, the IPC Athletics World Championships in Lyon in July, Broom-Edwards set a new personal best of 2.08m, to finish second.

Alongside his work as a clinical biomechanist, another duel with Poland's World and Paralympic champion Maciej Lepiato is on the cards in 2014 at the European Championships in Swansea.

He says: "I never thought of myself as disabled. I knew I had an impairment but never let that affect me. One of the things I have had to learn is to accept the impairment. I won't be as able as other high jumpers and can never get to that level because I can't strengthen up enough. I have to accept that and push as hard as I can." 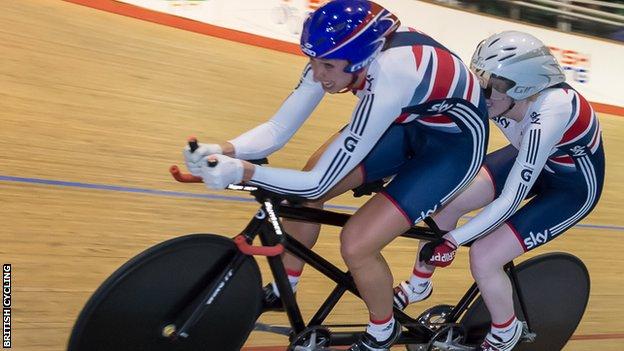 2014 aims: Medals at the Commonwealth Games in Glasgow and the World Championships in Mexico.

There was good news for para-cyclist Sophie Thornhill in that cycling's governing body, the UCI, agreed to schedule the World Championships in Mexico in April 2014.

The teenager was already aiming for a place on the England team for the summer's Commonwealth Games but will now have a chance to test herself against the best beforehand.

Thornhill has a form of albinism that affects the pigment in her skin, hair and eyes, meaning she has about 7-9% sight. She competes on the back of a tandem where she is guided by a sighted pilot.

Sophie Thornhill away from sport

She watched the Beijing Olympics and Paralympics on television and was helped into track cycling by family friend and fellow tandem rider Anthony Kappes, who won two gold medals in Beijing before winning another in London.

The least year has proved successful with three national titles alongside pilot Helen Scott, before teaming up with Rachel James, sister of world champion Becky, to win two gold medals on her international debut at the Newport International Para-Cycling Cup in November.

She says: "I never expected this year to be as successful. The way I train is far more disciplined. I train for a purpose and have a goal. That helps my training objective and makes training easier.

"You have to have complete trust in your pilot. They are seeing the bike. You work together in sync with each other and have to get on well." 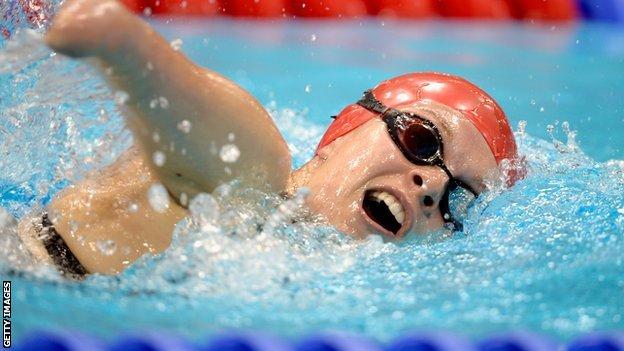 2014 aims: To retain her European title and finish on the podium in all events

Two-time Paralympic swimmer Lauren Steadman is hoping to make it to another Games but this time in a different sport - Para-triathlon.

The final-year psychology student at the University of Portsmouth, who was born missing her arm below the right elbow, has swapped the pool for the bike, roads and lake as the sport is set to make its Games debut in Rio.

Steadman started triathlon in 2011 on the advice of her uncle. She won silver in her first competition, then focused on swimming again ahead of the London Paralympics. After the games, she decided to concentrate solely on Para-triathlon.

Lauren Steadman away from sport

Steadman was a regular in the GB team for many years, swimming in the competitive S9 category at European, World and Paralympic Games. Although her swimming fitness was an advantage, she has had plenty to learn to complete the 750m swim, 20km bike ride and 5km run course.

Now she is working on the techniques of the cycling and running elements, plus the challenges that the transition between the phases presents for someone with an impairment.

After winning European gold in June, Steadman followed that up with victory in the British Championships in Liverpool, before winning silver behind team-mate Faye McClelland in the Tri-4 category in the ITU World Triathlon Grand Final in London.

Both McClelland and fellow Briton Clare Cunningham, herself a former Paralympic swimmer, will be pushing Steadman all the way in 2014 with three big events, including the European Championships in June in Austria, where Steadman is hoping to retain her European title.

She says: "After London, I decided had reached my swimming goals and was ready for a new challenge. I think I would probably have switched to Para-triathlon even if it hadn't become a Paralympic sport. All three disciplines have challenged me more than swimming alone did."