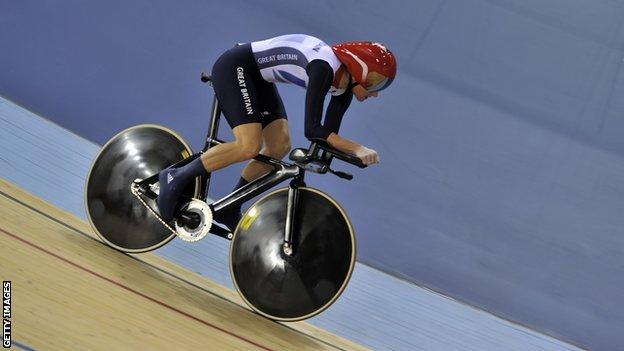 Paralympic champion Dame Sarah Storey returned to competition with an impressive win in the Paracycling International Cup in Newport.

The 11-time gold medallist, who gave birth to daughter Louisa in June, was victorious in the 3km pursuit.

She caught her American rival Jennifer Schuble with 1km to go and finished in three minutes 45.406 seconds.

There was also a world-leading time for Great Britain's Jody Cundy in the C4 kilo event.

Cundy clocked a time of 1:04.996, beating the 1:05.144 he set in 2011, but it could not be ratified as an official world record because of the absence of anti-doping administrators at the event.

"It is the first time I have ridden against the guys who competed and medalled in London so it was nice to win. To do a world record time and beat the Paralympic champion is good going," he said.

"I did a good time at the nationals six weeks ago, but since then I moved house and have been on a bit of a break and not doing as much training or been as focused as I should be - but it seems to have paid off so maybe long competition tapers are the way to go."

Storey had six weeks off after giving birth and has gradually built up her training in between the demands of a new-born, including breast-feeding.

But although her time was well off the world record of 3:32.170 she set in winning gold in London, she was still happy to be back in action.

"It was good to be back racing. The time isn't so bad but I definitely need to get fitter - it hurt at the end," she told BBC Sport.

Sarah Storey won five Paralympic gold medals as a swimmer before switching to cycling. Her 11 gold medals are a joint modern-era British record with Baroness Tanni Grey-Thompson and Dave Roberts

"I thought I would catch Jennifer but I found it tough to get by her because I didn't have as many reserves as I would normally have, but it is a good starting point and now I can build on it.

"That time would still have won me gold in London so I'm pleased to be still on top of the rankings."

The GB male and female tandem pairings of Neil Fachie and Craig Maclean and Sophie Thornhill and Rachel James added tandem sprint golds to the kilos titles both pairs won on Friday.

"We came here hoping to compete for gold," said Fachie, who won kilo gold and sprint silver with Barney Storey in London.

"We are still gelling together and it is good to get racing experience because we don't get too many chances. We will get back to training now - we still have a lot of work to do ahead of the Commonwealth Games."