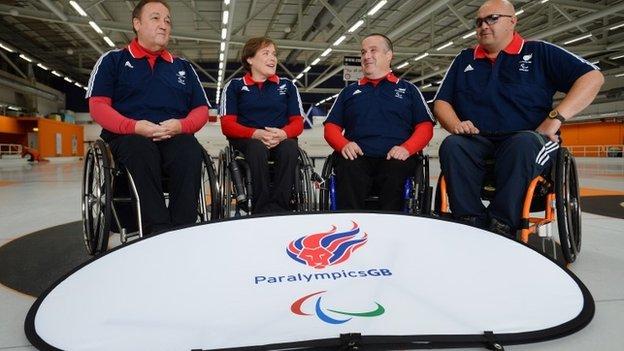 The success of London 2012 is helping to inspire Great Britain's athletes ahead of the 2014 Winter Paralympics, according to team boss Penny Briscoe.

And, with 100 days to the start of the Games, chef de mission Briscoe is hopeful GB can win a first-ever Winter Games gold medal, in Sochi, Russia.

"Since London, the British public has an increased appetite for Paralympic sport," she told BBC Sport.

"Our winter athletes are definitely feeling the benefits of that passion."

The British team is set to feature between 10 and 12 athletes, with five wheelchair curlers and between five and seven skiers likely to compete in the event, which runs from 7-16 March.

The curling squad - skip Aileen Neilson, Tom Killin, Gregor Ewan and Rob McPherson - was selected in August and the quartet have made their best start to a season for three years.

This weekend they travel to Ottawa for the Cathy Kerr International Bonspiel as they continue their preparations for their Sochi opener against Canada on 8 March.

The skiing team is set to be confirmed in mid-January, when the final allocation of places is decided by the International Paralympic Committee (IPC).

Visually impaired duo Kelly Gallagher and Jade Etherington will both expect to be included after winning World Cup and World Championships medals over the past 12 months.

Former model Heather Mills hopes to be part of the GB squad and, although the 45-year-old needs to improve her ranking, she has several World Cup qualification events in which to do so.

Andrew Lockerbie, the British team's performance director and the sport's team leader in Sochi, said high standards must be met.

"The only athletes we are taking to Sochi are medal contenders, we're not taking anyone who will just be there to make up the numbers," he said.

"Kelly [Gallagher] and Jade [Etherington] are obviously our top two athletes and if they perform, they should be on the podium.

"Our team is performing well and started the winter season strongly. Jade and her guide Caroline Powell had two firsts and seconds at the weekend in races in the USA.

"We have a medal target from UK Sport which is two medals of any colour and if our athletes are hitting peak performance, we know they can achieve that."

Britain's sledge hockey team, who last featured at a Paralympics in Turin in 2006, failed to reach the Sochi Games after losing all of their fixtures at the final qualification tournament in Italy in October.

But Briscoe believes the rest of the British team is in excellent shape ahead of the final three months of preparations.

"Both the curlers and the skiers have made a good start to their respective seasons and as a team we are in a good position," she said.

"We are all too aware that in both sports there is such a small margin of error. But it is nice to feel that, at this point, we have sports who are in contention for medals."

Meanwhile, IPC president Sir Philip Craven, who has already admitted to concerns about ticket sales, has urged the Russian public to get behind the Games.

"You only have to look at the last two years of results from the five winter sports to realise Russia are the team to beat," he said.

"The organising committee has created some superb venues for athletes to compete in and, with a brilliant home team, this is an event the Russian public should not miss out on.

"We may be 100 days away from the Games, but the performances of Russian athletes next year have the potential to not only create strong national pride but also help change perceptions of people with an impairment."