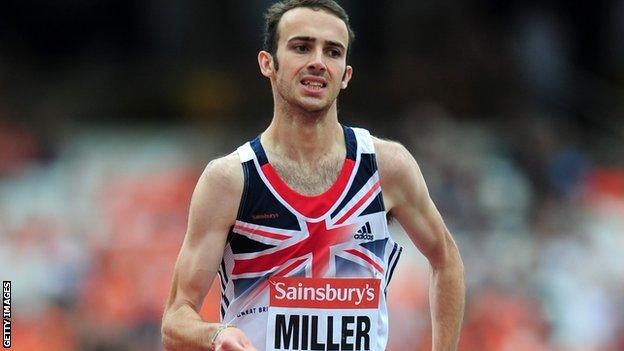 Barrow Paralympian Dean Miller will miss at least 12 weeks after suffering a stress fracture of the sacrum.

The former Under-23 World 1500m Champion placed sixth in a position higher than he managed at London 2012.

Where is your sacrum?

The sacrum is a bone at the base of the spine that joins it to the pelvis.

It is made up of five unfused vertebrae that do not fully fuse until a person's early 30s.

In October he was

"It's incredibly frustrating as there is very little exercise I can do on it. Last week, just all of a sudden I could barely even walk," he told BBC Sport.

"It's a massive blow as this is the time I need to be building towards next season. The plan was to go to a training camp in Florida after Christmas but that's out of the window now."

The 24-year-old suffers from cerebral palsy and as a result is more susceptible to injuries related to body posture.

But this problem comes just three months after Miller broke his toe after a bizarre accident involving a radiator.

"I missed some training because I booted a radiator whilst walking through the house. Since then, I've tried to do too much training, too quickly," he explained.

"I have suffered stress fractures before but not for several years, so I'm going to have density scans and other tests to see if there's a bigger problem."