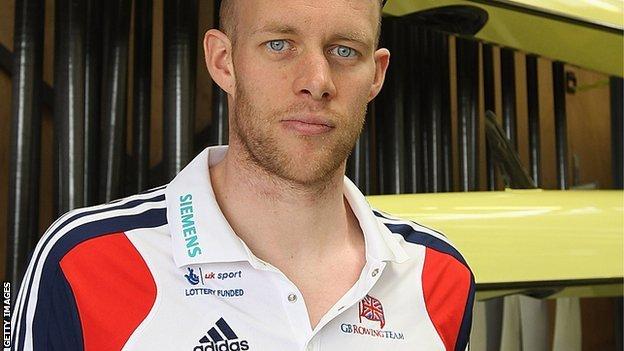 Life-threatening surgery, broken bones and a lifetime of obstacles have not stopped Paralympic champion David Smith scrapping, splashing and sliding his way to the top.

The Scot had already forged a successful karate career, spending six years on the international stage, and then came close to a 2006 Winter Olympic berth in bobsleigh, before winning rowing gold at the London 2012 Paralympics.

But now Smith wants to represent Great Britain in a fourth different sport - and hit the road at Rio 2016 as a cyclist.

Now he is preparing for his first serious bike race at the International Para-cycling Cup, a three-day event which starts in Newport, Wales, on Friday.

"I hope that it's the start of my journey to Rio," Smith told BBC Radio Berkshire.

"To be in Rio in a different sport would be special, so with that in mind my first race is at the velodrome in Wales as a guest rider in the 1km and 4km pursuit."

The 35-year-old, who teamed up with Pamela Relph, Naomi Riches, James Roe and cox Lily van den Broecke to win mixed coxed four gold, retired from rowing after London 2012 because of deteriorating health.

But Smith, born in Dunfermline and now living in Aviemore, is used to overcoming adversity in pursuit of sporting glory, having been born with both feet facing backwards, and had bones repeatedly broken and reset to correct the problem as a child.

Still, he grew up to "fall in love" with karate.

After deciding that six years of "beat ups" was enough, Smith gave athletics a try - and he even turned out to have pace to burn.

But there are some side effects of having a foot that was nearly amputated at birth.

"I set off in athletics and took to the 400m, but due to my feet I couldn't run around the bends and ended up shattering and having stress fractures all through my right foot and up my right leg and into my hips," he said.

After being born with a club foot, Smith spent the first three years of his life having his bones broken and reset to correct his foot alignment. By the age of 15, he was competing internationally as a British karate junior. Then, by 2002, he was the brakeman in a British World Cup bobsleigh team.

When injury ended his bobsleigh career, he turned to rowing and was soon competing internationally as part of an 'adaptive' mixed coxed four crew.

Along with the sports that Smith competed for Great Britain, he also won a shinty junior Scottish title, competed in Austria, France and New Zealand in skiing and claimed a East of Scotland 400m athletics title.

"I wasn't massively slow, I was running about 49 seconds in my first year in the sport so I just thought it was just another dream gone.

"It was then that it hit me - I had the bug and really wanted to be an Olympian. I was never going to let it go and it turned into a bit of an obsession."

By chance, he one day turned on the television and saw bobsleighing. There were no bends, he fancied himself running in a straight line on ice and went for it.

He was brakeman for the British four-man bob that fell one hundredth of a second short of making it to the Winter Olympics in Turin.

Then a mystery neck injury, a constant pain thought to have been brought on by overtraining, ultimately forced him to give up bobsledding.

He calls the realisation that his foot classified him for the Paralympics a "sliding door" moment in his life and chose then to take up rowing.

And it is not just because that particular sporting adventure started with World Championship victory in 2009 and finished on the top step of the podium at Eton Dorney.

Rather, it was team physiotherapist Patrick Dunleavy's discovery in 2010 that there was something not quite right when manipulating his spine.

Doctors investigated, discovering that that mystery neck injury was in fact a tumour the size of a tennis ball embedded in his upper spine, behind his throat.

"All I thought about was that I needed to be in London. I never made a team with it [the tumour] in me. But with it taken out there was nothing to stop me from getting to London," Smith said.

"There are complications with surgery sometimes and I suffered a blood clot inside the spinal chord. Once they sent me home to Ascot I woke up one morning and was paralysed from the neck down. I was rushed back into hospital for another surgery."

After his second operation he had to learn to walk again, not that Smith would let something like that stop him from achieving his Paralympic dreams.

"I just remember lying there thinking 'I'm still going to be in London and going to win gold'. I didn't mean it in an arrogant way. I just wanted it so, so much and would do anything to get to the start line."

Scar tissue from that life-threatening spinal surgery - with surgeons opting to go through the front of his neck and around his windpipe and vocal chords to access the spine - eventually led to his retirement from rowing and now poses new problems.

He even has plans to cycle around the world, but after being invited to trial with the GB cycling team he admits his appetite for competition is far from satisfied.

"My one love is pulling on that GB top and competing - it's that one moment when you are competing and your heart rate is over 170 and you are giving it everything," he said.

"I don't really know what the future holds, I have to go in for more scans to see what is happening with the scar tissue because if that continues to grows to the same size as the tumour it will cause the same problems.

"Life is all about hurdles - it is how we get over them which defines who we are."